Editor’s Note: Hover over terms in sea green for a pop-out glossary definition. Full glossary also included at the end with terms listed in the order that they appear.

China grew its renewable energy industry by leaps and bounds over the span of a few decades. According to the latest data available, in 2020 China accounted for 54% of global wind-turbine assembly capacity and 70% of solar module manufacturing.1,2 The speed of China’s ascent in solar and wind energy over the past ten years can be attributed partially to its system of subsidy support. As solar and wind power get closer and closer to grid parity status, the policy landscape in China is changing accordingly, moving away from generous subsidies and towards putting renewable energy to use.

China supported growth in renewables previously through a combination of goals outlined in Five-Year Plans, state-backed research in the form of accommodative programs – such as the 863 and 973 programs – tax incentives, feed-in tariff (FIT) schemes, as well as subsidies from a Renewable Energy Development Fund (REDF). In particular, the rollout of a national FIT scheme in 2011 helped capacity take off throughout the 2010s. From 2010 to 2020, renewable energy capacity in China increased nearly four-fold from 233.26GW to 894.88GW.4 For comparison, while China added roughly 661GW of renewable energy capacity between 2010 and 2020, the rest of the world in total added just 1062GW.5 Between 2012 and 2021, the total share of solar and wind energy in China’s power generation increased from 2.6% to 11.8%.6 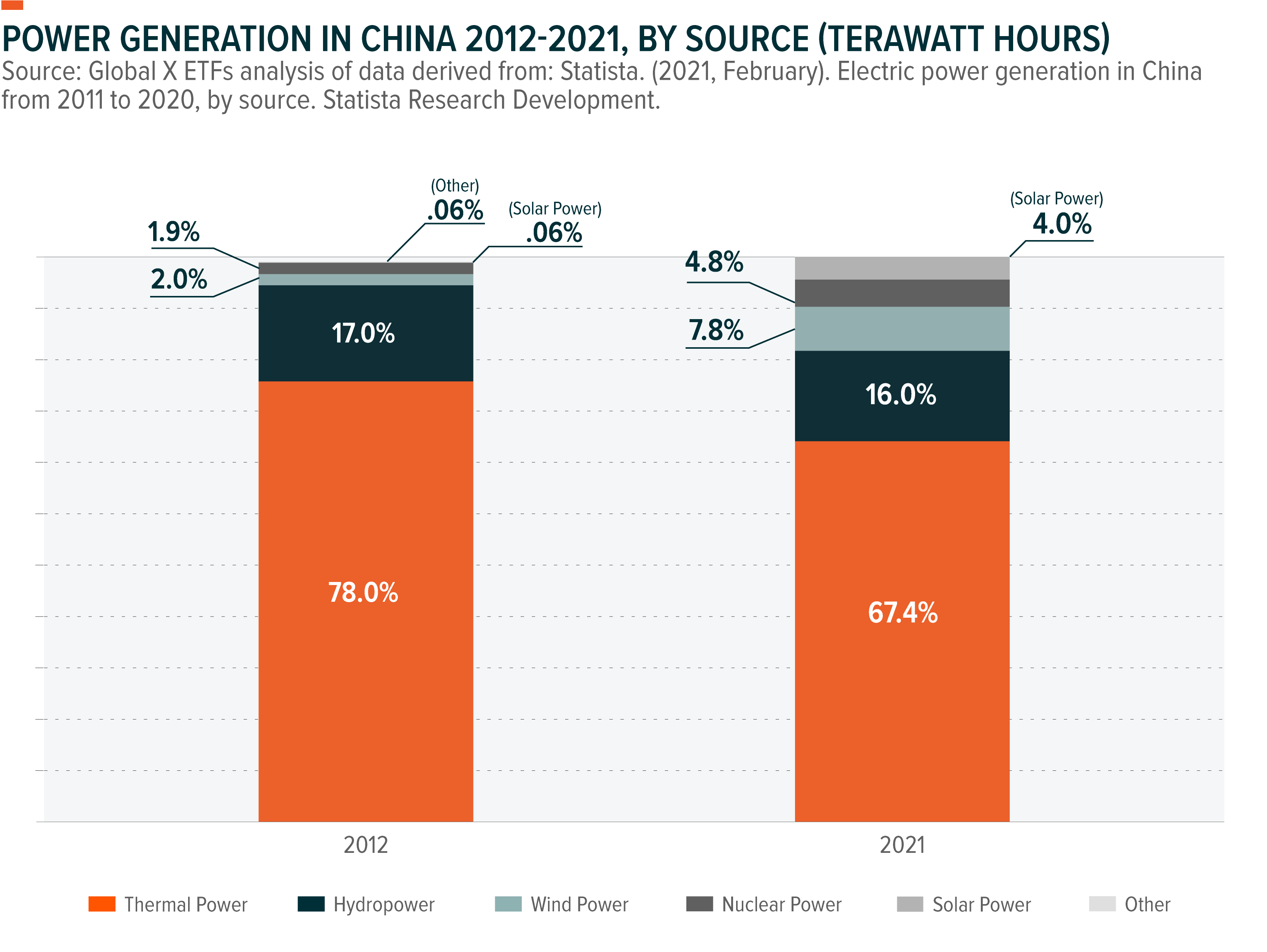 Feed-in tariffs are a policy mechanism used to boost adoption of renewable energy by reducing risk for producers of energy. With an FIT in place, producers of renewable energy are typically given a long-term contract of around 20 years that guarantees compensation above the market rate for units of electricity produced and fed into the grid. The ultimate effect of the FIT is the levelling out of the playing field between renewables and traditional sources, effectively expediting the transition towards renewables. Using China’s case as an example, at the inception of the national FIT system in 2011, generators of solar energy were given a rate of around one RMB per kilowatt hour for projects approved by the National Reform and Development Council (NDRC).7 These payments come from the central government’s REDF, which is supported by surcharges on retail electric consumption.

REDF Buckles Under Weight of Subsidies

The FIT system benefitted the private sector but came at a burgeoning cost for the public sector. More than ten years out from the inception of the FIT system, the landscape is drastically different. Solar and wind power capacity grew faster than expected in China, and policymakers were not willing to increase the electricity surcharge, putting the REDF into a deficit of roughly $50 billion by the end of 2020.8 To put the gap into perspective, it is estimated that it could take until 2041 for China to pay off its deficit.9

While the boom in renewables capacity is good for the environment, for the private sector companies that formed long-term plans based around the assumption of 20-year FIT payments, overdue payments are a real burden. In many cases these companies started projects and incurred costs, but are still waiting for the subsidy pay-out. 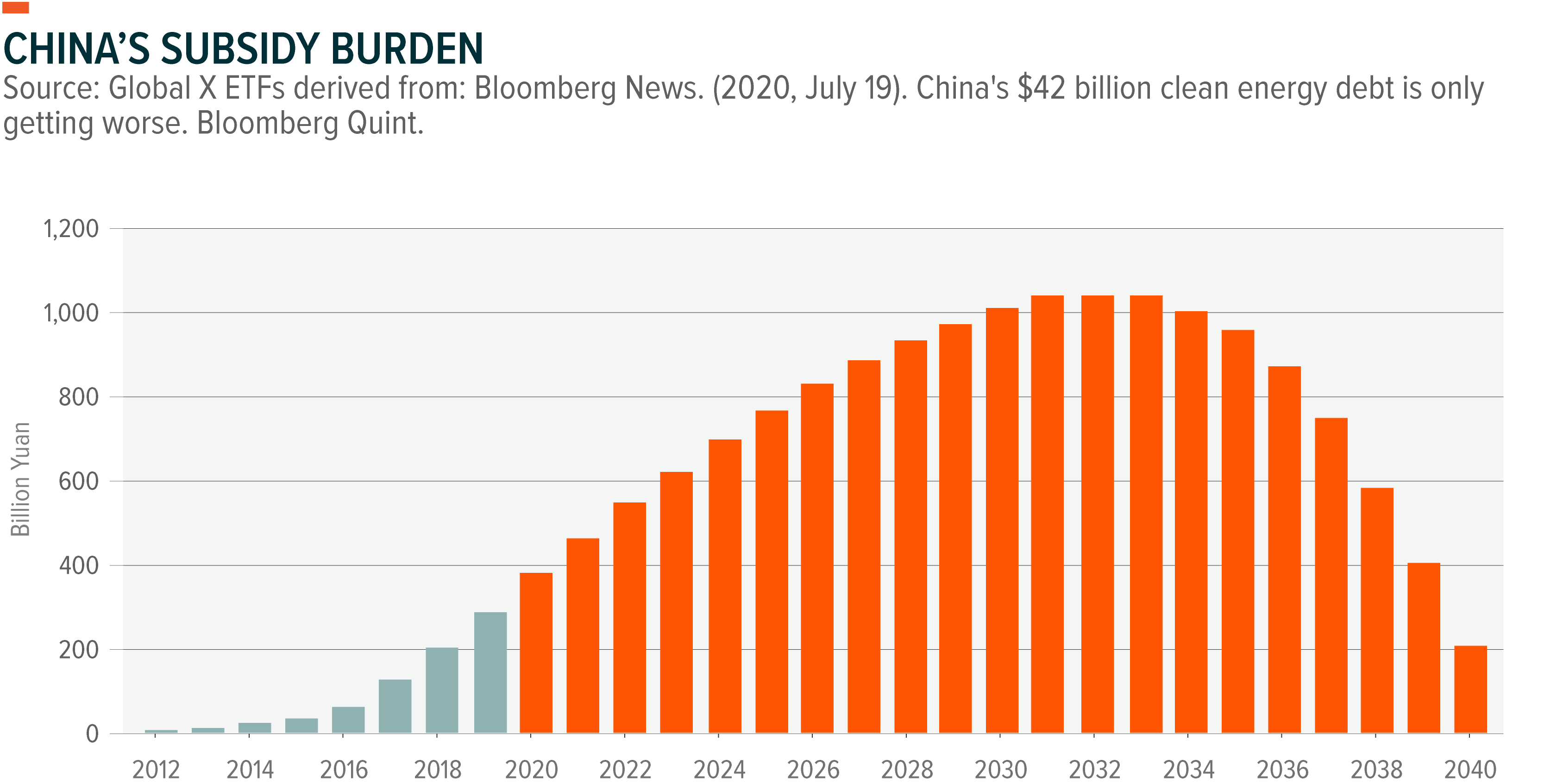 According to one estimate, it could take until 2041 for the deficit to be paid off.10 Of course, there is the possibility that the government will decide to prioritize resolving the deficit and pay it off much earlier, which could be a boon to solar and wind companies.

At the same time, the once prohibitively high cost of solar and wind energy is now significantly lower and edging closer and closer to the coveted grid-parity line. It is estimated that the cost of renewables will fall below the cost of coal power around 2026, which eliminates the urgent need for an FIT system.11 Under these new conditions, Chinese policymakers deemed a new approach to renewable energy policy is in order. 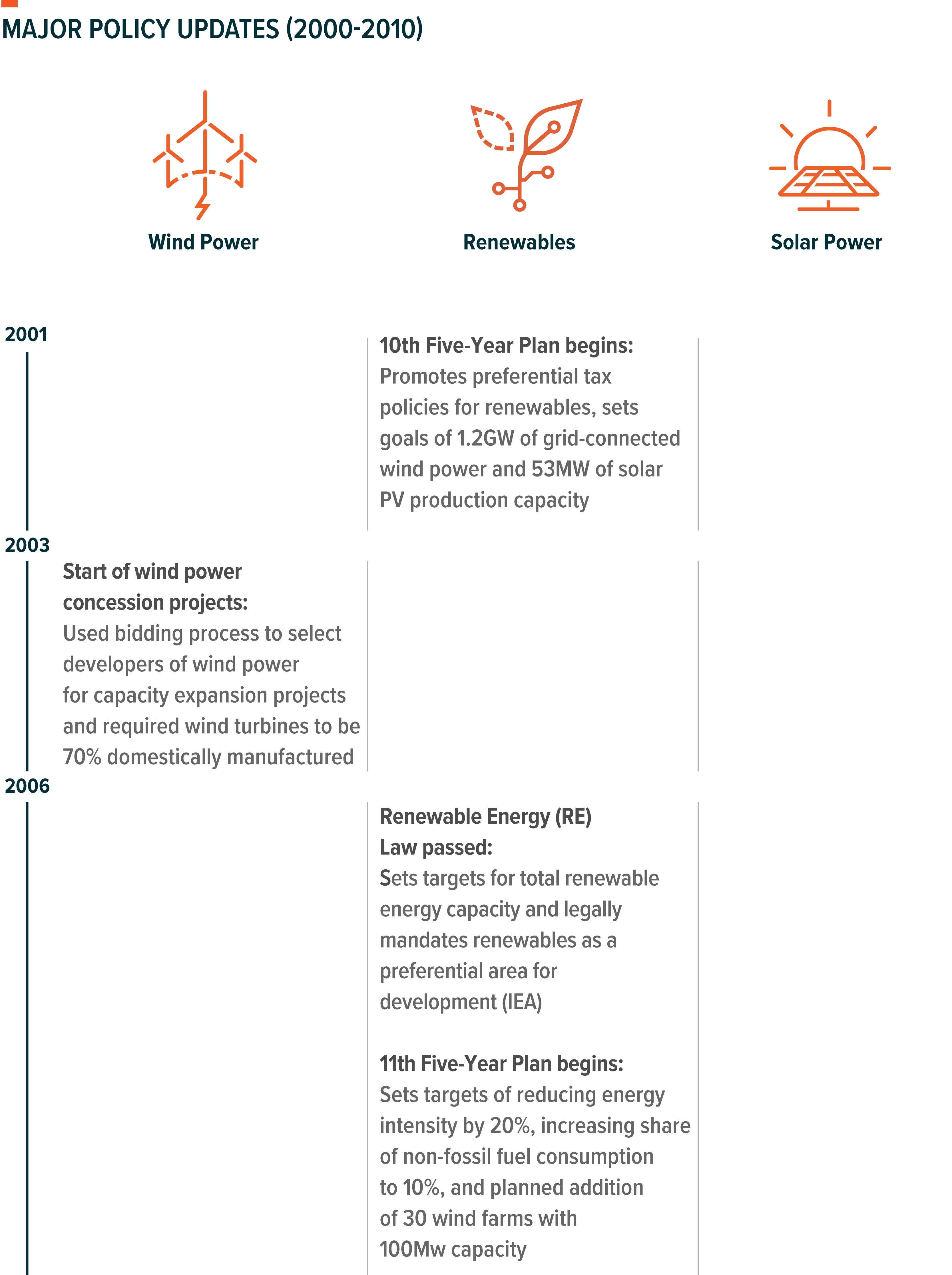 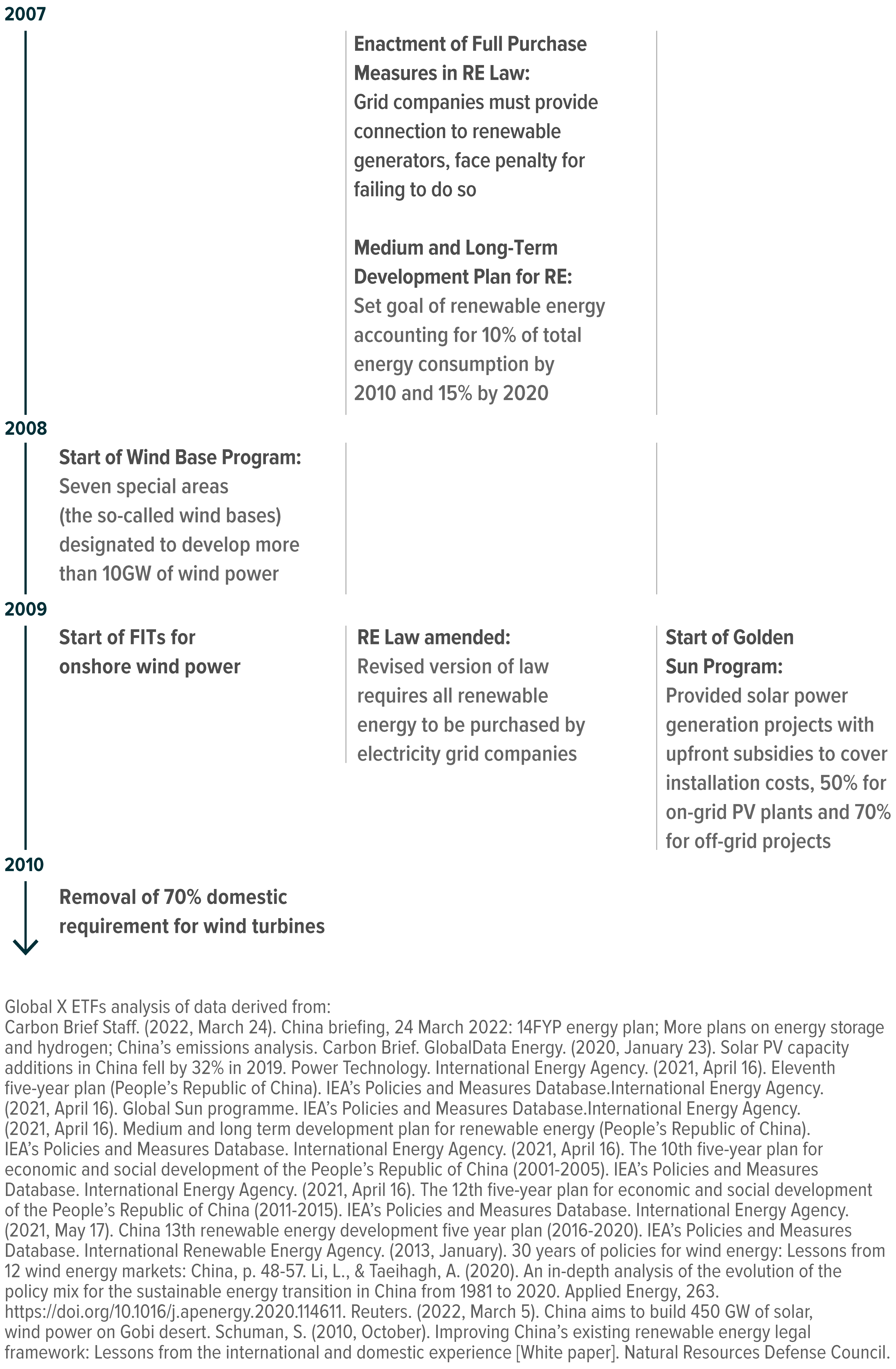 Subsidies enabled rapid capacity expansion but problems with integration needed to be resolved. To that end, the government started shifting more focus towards making sure renewable energy capacity is actually put to use.12 Curtailment refers to the rate of electrical output intentionally reduced because of a lack of demand or transmission problems. If curtailment rates are high for wind and solar energy, that means a chunk of the capacity accumulated throughout the 2010s is left unused. Curtailment of solar and wind power became a serious problem in the mid-2010s as capacity boomed. Over the last few years, rising demand for solar and wind energy along with a shift in policy focus contributed to a reduction in curtailment risk. Recent government policies include the introduction of the Green Electricity Certificate (GEC) system in 2017 and the Renewable Portfolio Standard (RPS) system in 2019. Under the RPS system, provinces are required to make sure a certain percentage of their electricity consumption comes from renewable sources. With the GEC system in place, market entities (not individuals) that are given renewable energy consumption quotas by the local government can make up for falling short of the quota by buying “green certificates” from companies that exceeded their quota.13 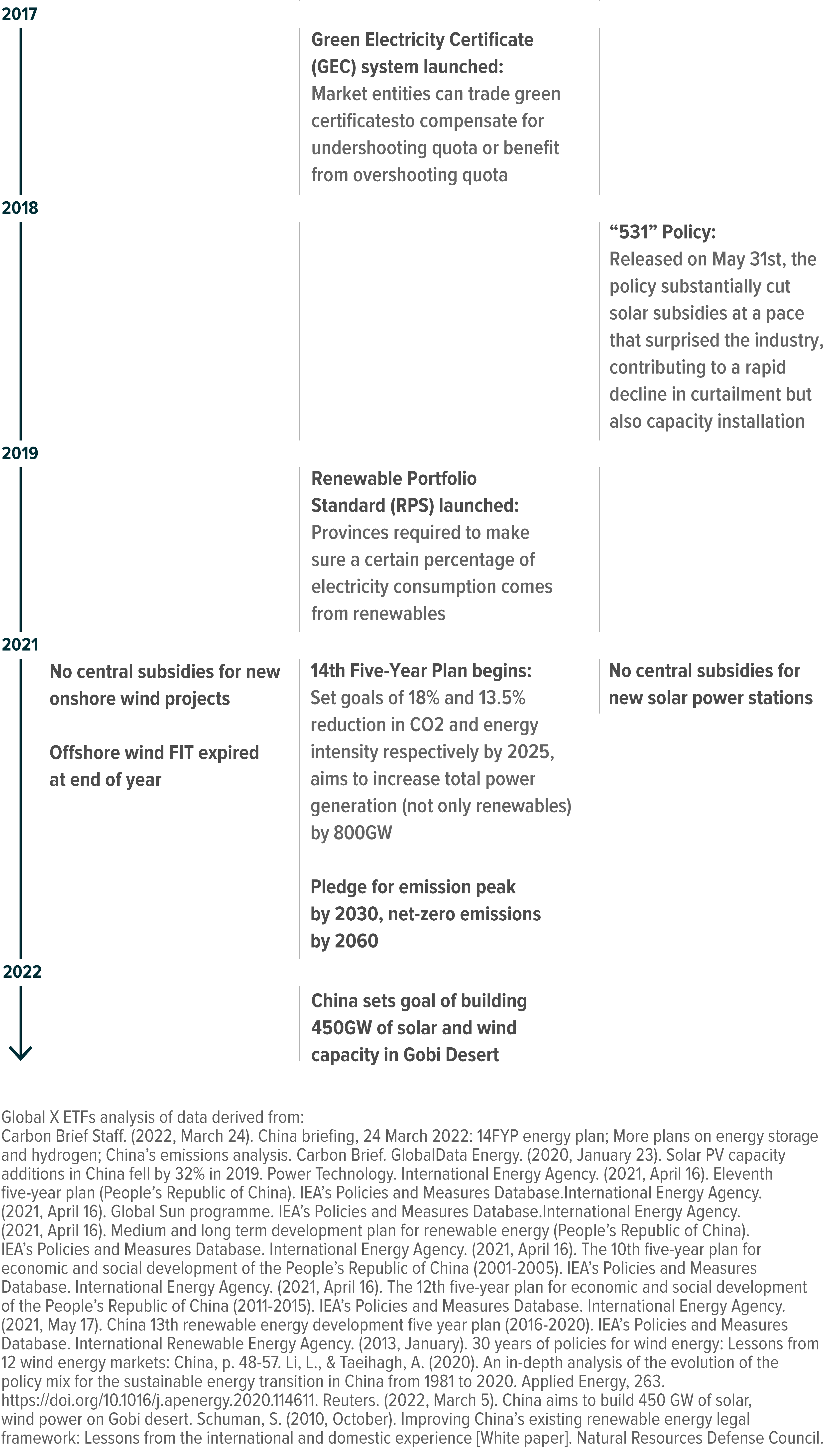 Currently underway, the next step involves phasing out the renewable energy subsidies, with a good portion of deadlines and cuts already occurring in 2021 or coming up in 2022. The FIT for offshore wind projects expired at the end of 2021, while central subsidies for new solar power stations and onshore wind projects were halted in August 2021. Simply put, 2022 is set to be a year of transition.

China’s winding down of subsidies should have mixed effects in the short-term, but in the long-term it appears a more sustainable choice than continuing to pay out subsidies and allowing the deficit to build up despite increasingly competitive costs for renewables. In the short-term, inefficient companies that depended too heavily on subsidies may face difficult adjustments, moving the industry in a more market-oriented direction. Of course, companies were not taken by surprise and had time to factor this change into their plans.

For the companies still waiting on delayed subsidy payments, the central government should gradually get on the right track towards paying off the REDF’s subsidy debt, which can eventually provide relief to those companies in the long-term.

The key takeaway is that lower costs for solar and wind power make this transition appropriate. 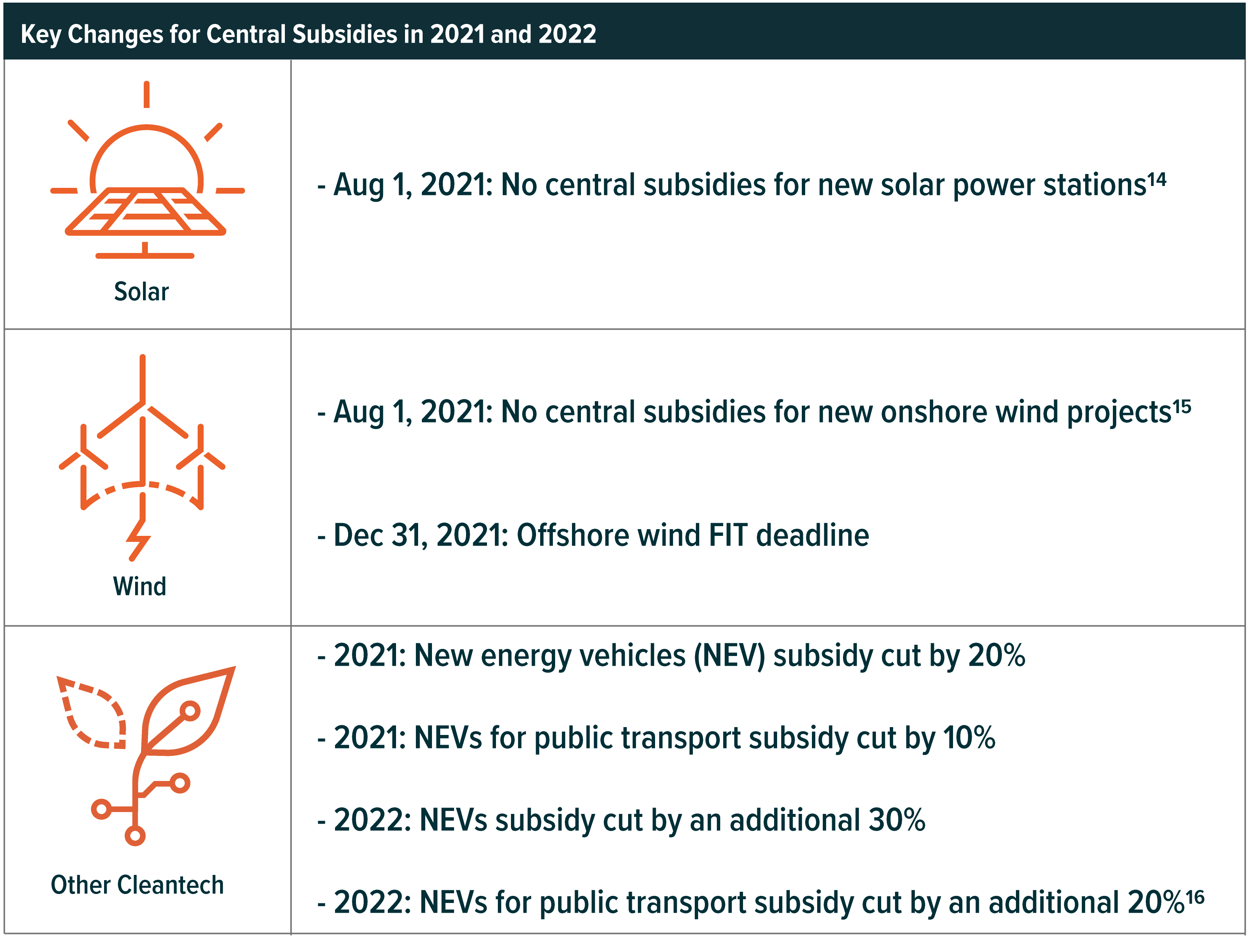 China is without a doubt the most important player in the solar manufacturing supply chain. To make a solar panel, silicon must be collected and made into a cylindrical ingot, which is then sliced into thin disks called wafers. The wafers are processed and fitted with metal conductors to make cells, which are finally linked together to form the panel.17 Chinese production accounts for roughly 72% of polysilicon, 98% of ingots, 97% of wafers, and 81% of photovoltaic (PV) cells in the global solar supply chain.18,19

Between 2010 and 2020, the cost of energy generated by solar plants fell 82%.20 However, throughout 2021 and 2022, China has been grappling with hiccups in its solar supply chain that has been pushing up prices. Between August and September 2021, power shortages disrupted the domestic supply chain and contributed to solar-grade polysilicon prices jumping up by 300%.21 Those prices are now at a level of roughly $33 per kg as of March 23, 2022, compared to roughly $15 per kilogram in March 2021.22 However, from a demand perspective, the production headwind is balanced against the fact that 2022 is still expected to be a record year for solar installations in China. China could install 75 to 90 GW of solar capacity as rooftop solar power is rolled out in Central and East China, while large solar stations are built in the Gobi Desert near China’s border with Mongolia.23 More importantly, the long-term trend of decreasing costs for solar energy will likely hold up despite the short-term fluctuations.

Between 2010 and 2020, the global cost of energy generated by onshore wind and offshore wind fell 39% and 29% respectively.24 Wind energy is now China’s third largest source of energy, making up roughly 7.8% of total generation in 2021.25 China’s lead in wind turbine manufacturing is not quite as strong as its lead in solar manufacturing, but it is still a key player in the global wind supply chain.

Records for wind energy were vastly exceeded in 2021. This was particularly true for offshore wind installations, which saw China’s total capacity of 9.49GW in 2020 increase by 16.9GW in 2021.26 The surge in installations was no coincidence, as companies were rushing to set up projects before the year-end deadline, after which the FIT ended for new offshore wind projects. 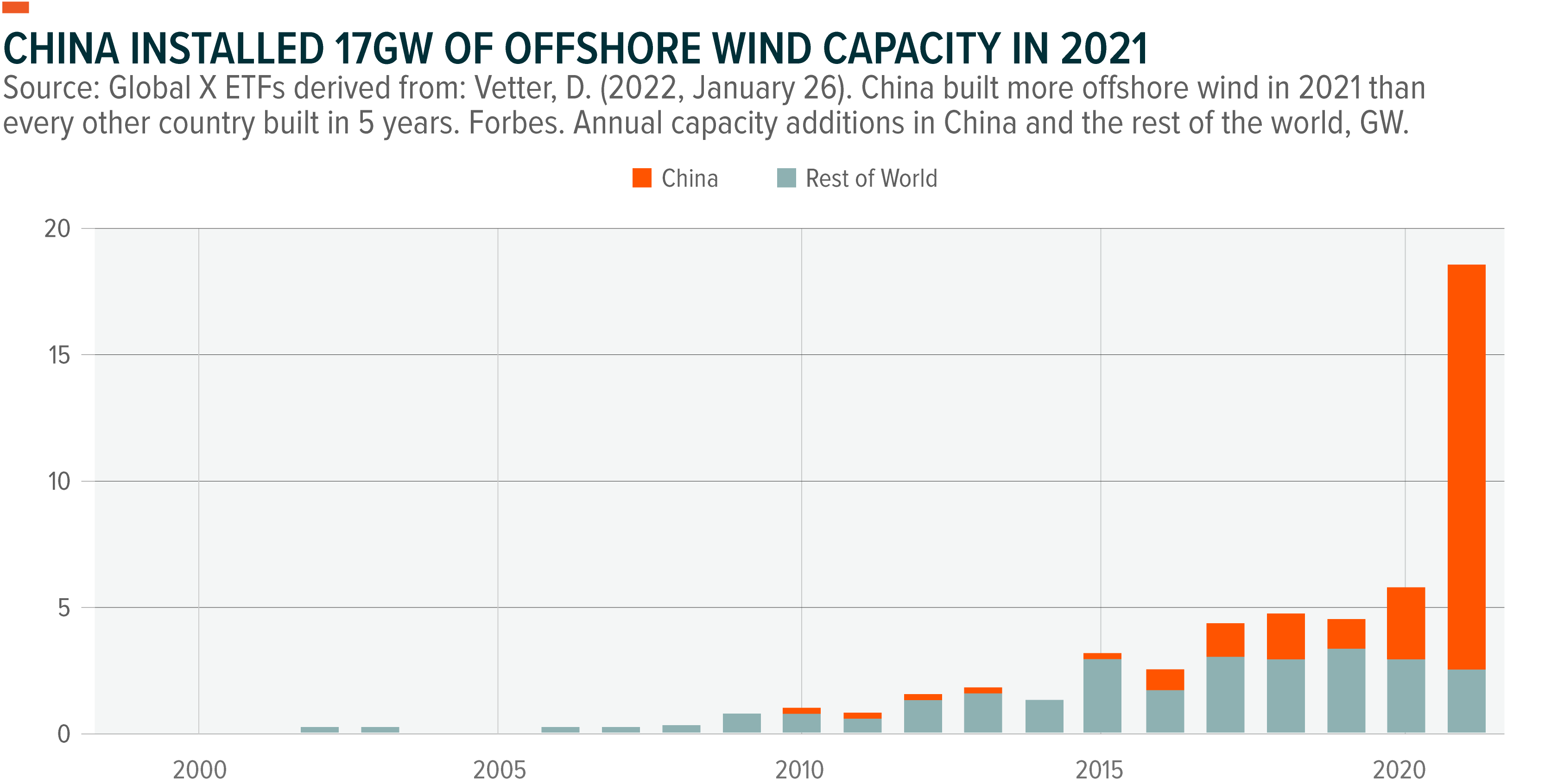 In 2021, China’s scramble to install offshore wind before the expiration of FITs made installations in the rest of the world and all previous years look small in comparison.

Feed-in tariffs helped China build out renewable energy capacity at an astonishing rate. The fact that solar and wind energy are approaching competitiveness with traditional sources, such as coal, is an exciting development for these industries, but it may also necessitate a change in policymakers’ approach. In some ways, 2022 may mark that transition for China, as it begins to step into the post-subsidy era for renewables. Despite challenges that exist for solar and wind, we expect both sources of energy to continue moving up the adoption S-curve. The strong demand picture over the long run, we believe, will help solar and wind energy adoption persist in the foreseeable future.

Glossary
Grid Parity: When a renewable power source can generate power at a price equal to or lower than traditional sources.
863 Program: A state-backed research program approved in 1986 that aimed to promote key technologies to move China towards technological independence. The program ended in 2016.
973 Program: A state-backed research program formulated in 1997 that aims to promote research that lines up with China’s national strategic targets.