For more than 10,000 years copper has been a significant contributor to the world’s social and technological advancements. Its special properties make the metal useful for a wide range of applications including construction, industrial machinery, transportation, electric generation, and electronics. Over the past 50 years, the demand for refined copper has tripled.1 In this piece, we seek to shed light on copper by answering six key questions:

How is Copper Produced?

Copper is found across the Earth’s surface, mainly as copper minerals or in mixed ores with other metals like zinc and lead. It is primarily mined through open-pit or underground mining techniques. Open-pit mining, which accounts for approximately 90% of copper production, extracts ores near the earth’s surface via graduated steps that lead into the earth’s crust.2,3

When ore is too deep to mine via open-pit operations, underground mining may be utilised, which involves digging shafts into the earth’s surface to allow machines or explosives to separate the ore.

Once ore is extracted, it must be processed to achieve a high level of purity. Sulphide ores undergo a five-step process: 1) the ore is crushed into a fine sand to loosen the copper minerals; 2) it is froth floated, where the sand is mixed with water and chemicals to make the copper particles water repellent; 3) air is passed through the mixture, allowing the copper minerals to attach to bubbles and float to the surface; 4) the copper-rich froth is then thickened into a concentrate, which can be smelted into a purer copper concentrate, called anode slabs; and 5) these slabs are further refined through electrolysis into copper cathode slabs, which are 99.99% pure copper. Copper oxide ores undergo a three-step process to achieved high levels of concentration. First, in a process called heap leaching, sulfuric acid is used to separate copper from the ore. Next, the solvent extraction stage moves the copper from the leach to a solvent, removing impurities. Last, electrowinning involves passing an electric current through the solvent to positively charge copper ions, allowing them to be plated onto a cathode.4 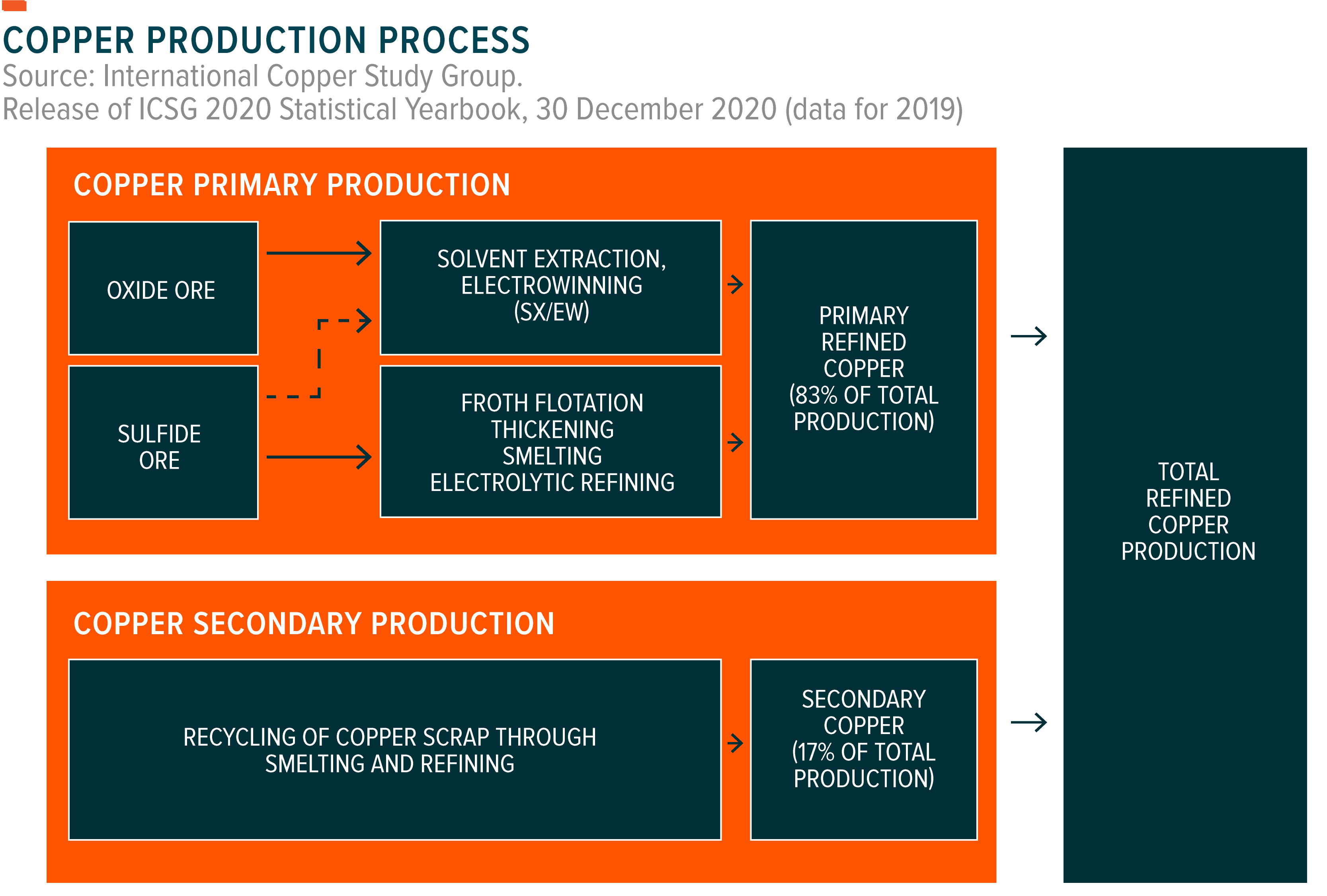 Where is it Produced?

Chile is the world’s largest copper producer, accounting for 28% of world copper mine production in 2020.5 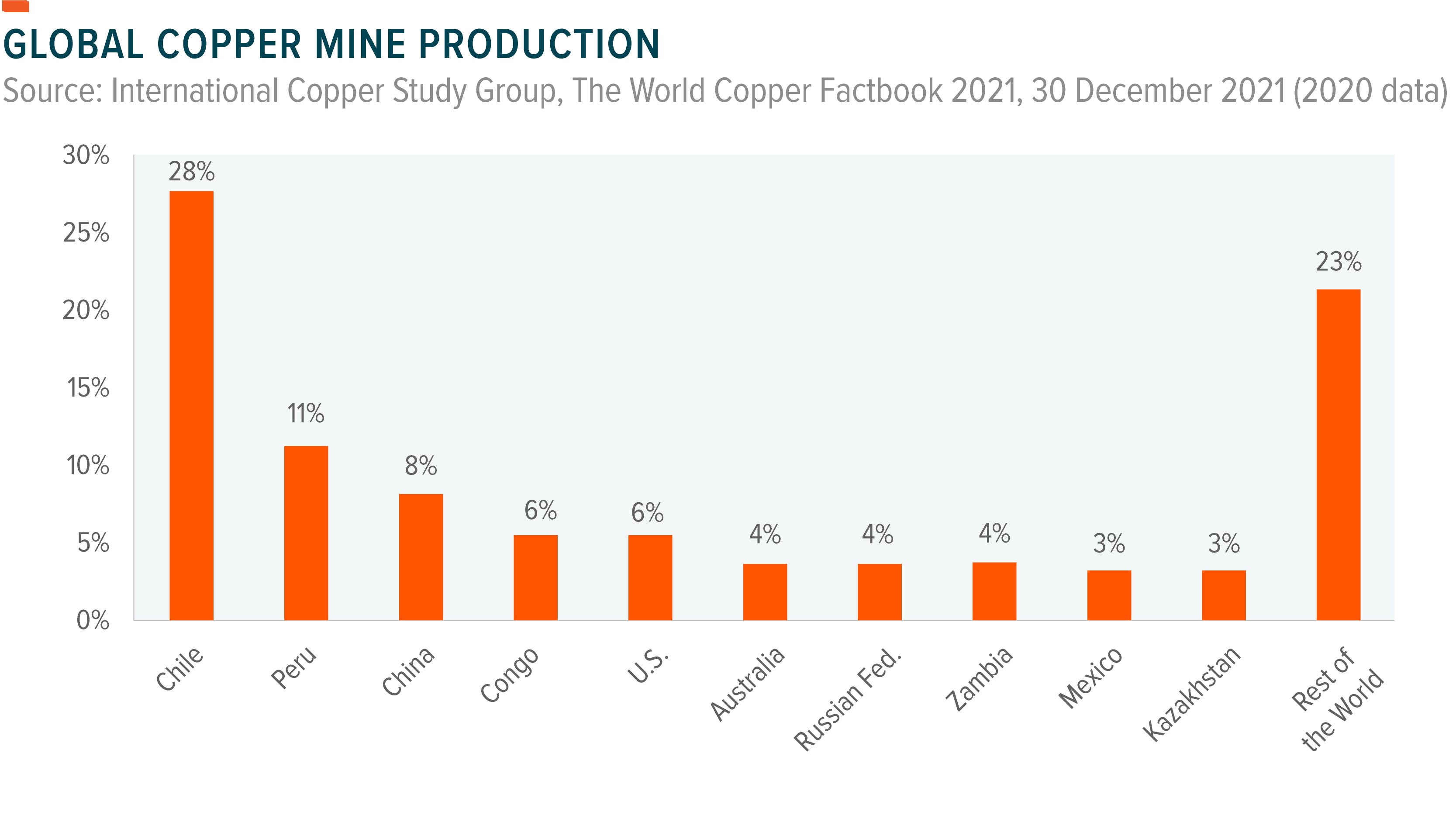 By refined copper production, which includes both copper anodes and scrap metal, China is the leader, accounting for 41% of total world refining in 2020.6 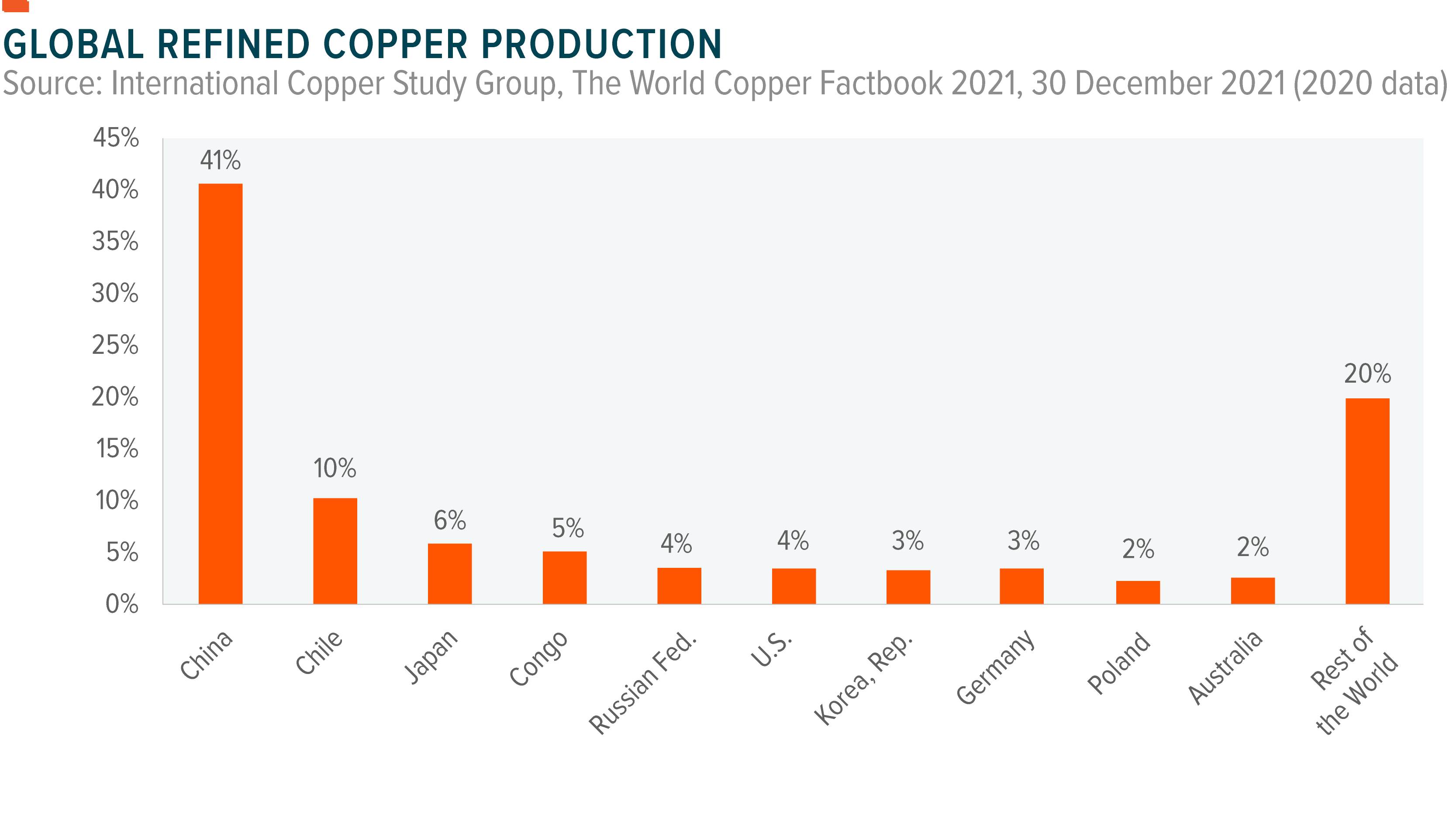 In the chart below, we show the copper value chain, including the role of each of these players. 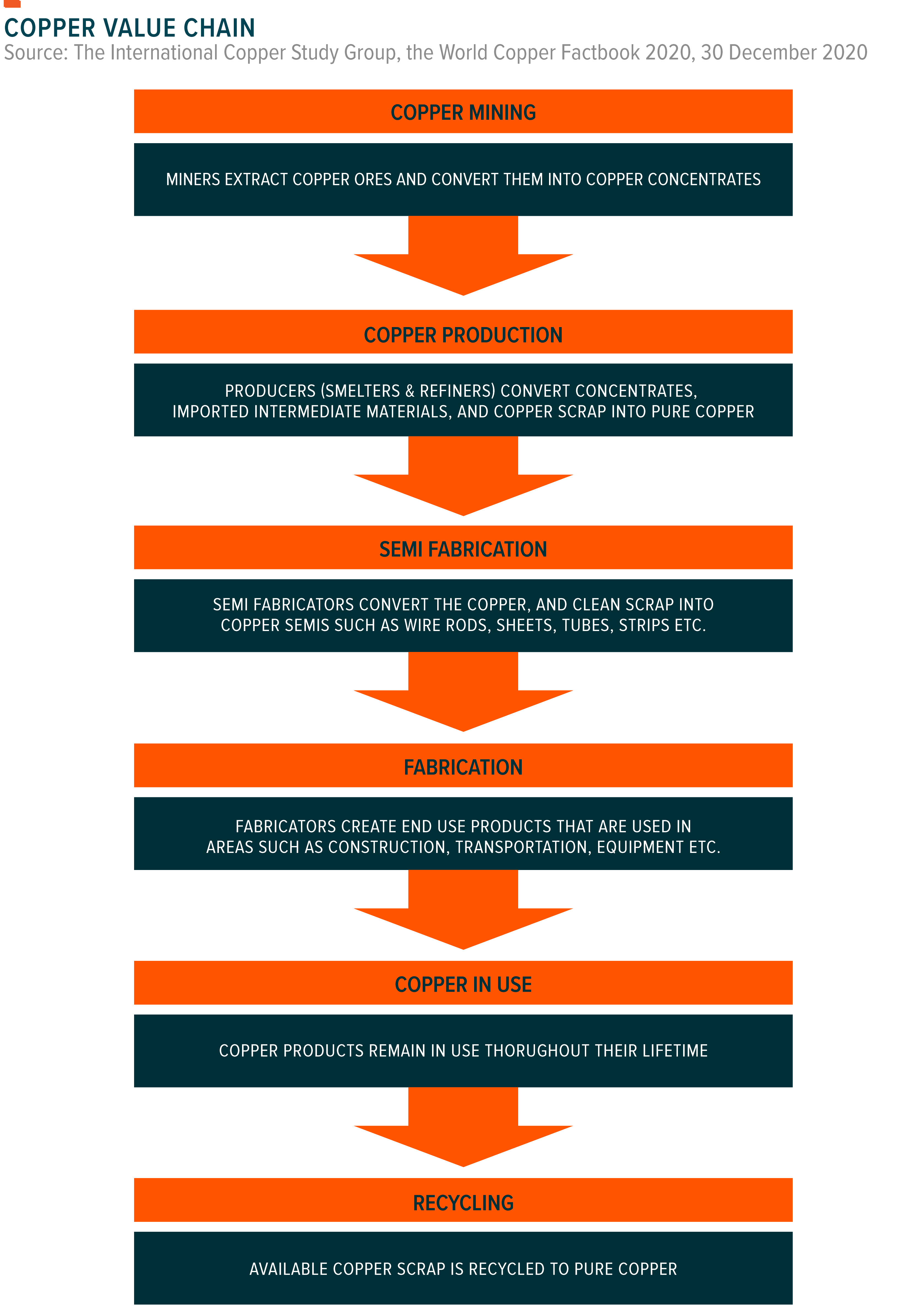 How is Copper Used?

Copper and its alloys have a wide range of applications, given the metal’s properties as a good conductor of electricity and heat, and resistance to corrosion. A few of its applications include:

Equipment: Copper is widely used in equipment manufacturing, such as for wires, connectors, and switches in electronic equipment, as heat exchangers in cooling equipment like air conditioners and refrigerators, and in microprocessors of mobile phones, computers, and other appliances.

Infrastructure: Given that copper is much cheaper than precious metals with similar electrical conductivity, it is frequently the metal of choice for the generation, transmission, and distribution of electricity. It is also a key component of renewable energy systems and data transmission in the telecommunications industry, including internet services and cable wiring.

Construction: Copper is often used for wiring residential and commercial buildings. Given its resistance to corrosion, it also has frequent applications in roofing, plumbing, and sprinkler systems. Since copper and its alloys have antimicrobial properties, brass (made of copper and zinc) doorknobs are widely used in public places.

Transportation: Copper is used in most forms of transportation such as airplanes, trains, trucks, and cars. An average car uses about 23 kg of copper in the form of motors, wires, brakes, bearings, connectors, and radiators.7 More modern features such as on-board computers, satellite navigation systems, and safety devices also utilise copper. Copper nickel is found in boats and ships because of its corrosion resistance and antifouling properties. Next generation electric and hybrid vehicles, airplanes, and high-speed trains rely even more on copper than earlier iterations given their heavier dependence on electronics.

Industrials: Copper is essential to high-efficiency motors, transformers, and generators. It is also used to make gears, bearings, and turbine blades. It can be found in heat exchange materials, pressure vessels, and vats. Propellers, oil platforms, and coastal power stations, which are exposed to the marine environment, also depend heavily on copper.8,9,10 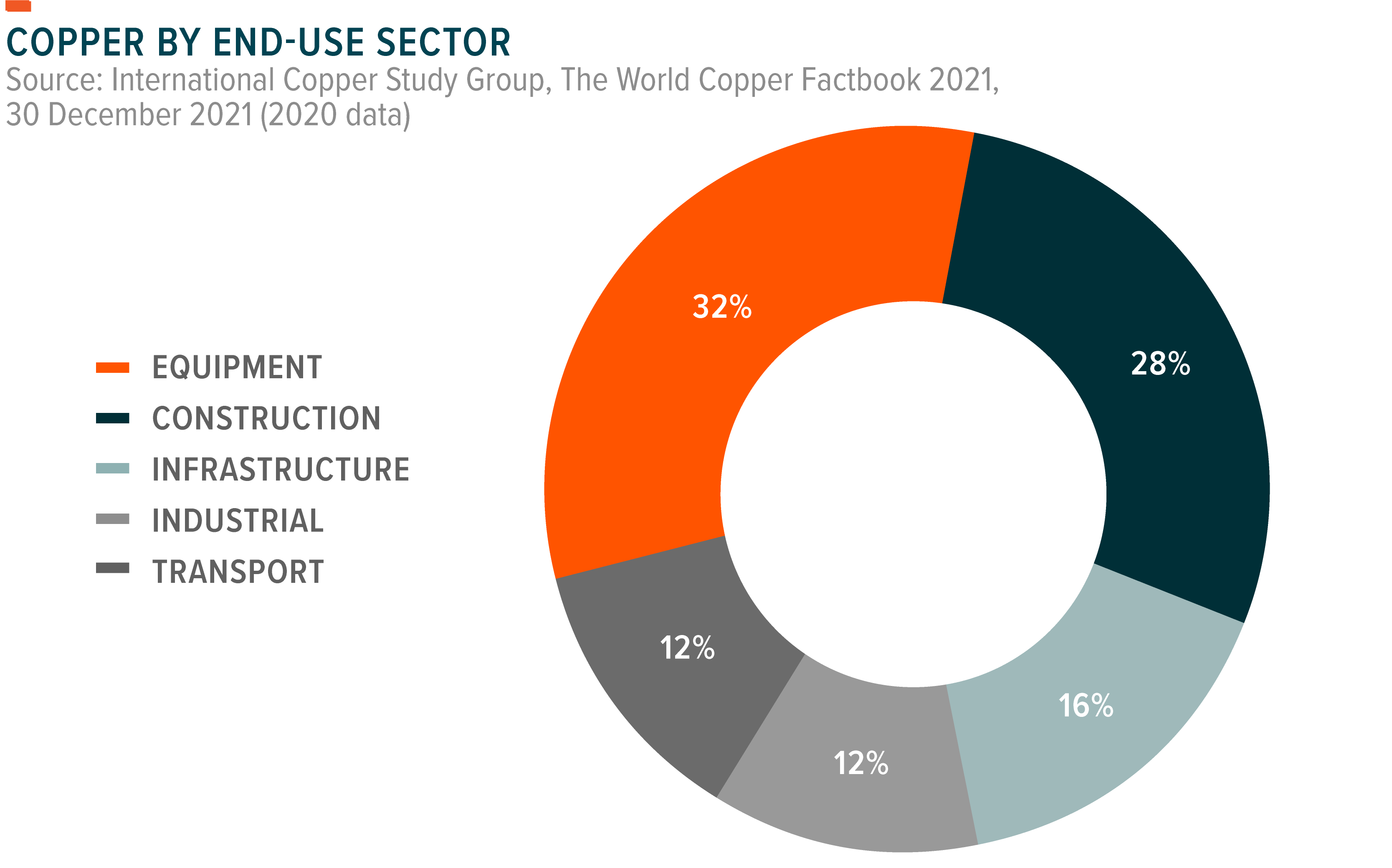 What are Its Supply and Demand Dynamics?

Copper demand is highly correlated with global economic activity. With Asia accounting for two thirds of the global copper usage, demand from emerging economies, like China and India, significantly impacts the metal’s overall demand. Another important driver of copper is the US homebuilding industry which is expected to benefit from the US$1.2tr American Infrastructure and Job Act.

Copper is often seen as a leading barometer for global economic health. When the Covid-19 outbreak hit China and subsequently spread across the globe, copper spot prices fell from US$2.86/pound in mid-January 2020 to US$2.12/pound in mid-March, falling 26%.12 Quarantine measures forced copper mines around the world to shutter production for extended periods. A market imbalance developed shortly thereafter as certain economies began the re-opening process, but copper production lagged behind. Copper prices took off from there, hitting $3.52/pound at the end of 2020. By February 2021, copper had risen above $4.00/pound, nearly doubling March’s lows.13

Although supplies are plentiful, disruptions sometimes arise due to labour strikes and natural disasters in major production regions like South America. The possibility of using copper substitutes, which has been made possible by technological developments, could negatively impact the metal’s demand. For instance, aluminium is increasingly used in place of copper in power cables, electrical equipment, and refrigerators, while steel and titanium can be used as heat exchangers.16

The International Copper Study Group (ICSG) forecasts that global refined copper production will grow a modest 1.7% in 2021, and 3.9% in 2022. 17 The higher increase in output in 2022 is a result of the continued recovery to pre-pandemic levels in several countries, notably Peru. This increase will also be supported by the planned start-up of some large projects, as well as the recently commissioned mines and expansions.

Copper demand increased by 28% over the last decade, driven primarily by infrastructure development in major countries such as India, China, and the United States. The rapid rise of semis production capacity should continue to support demand for refined copper.18 Copper demand is expected to grow by about 2.4% in 2022 as the global economy reopens.19 Overall, supply is expected to slightly exceed demand in 2022. 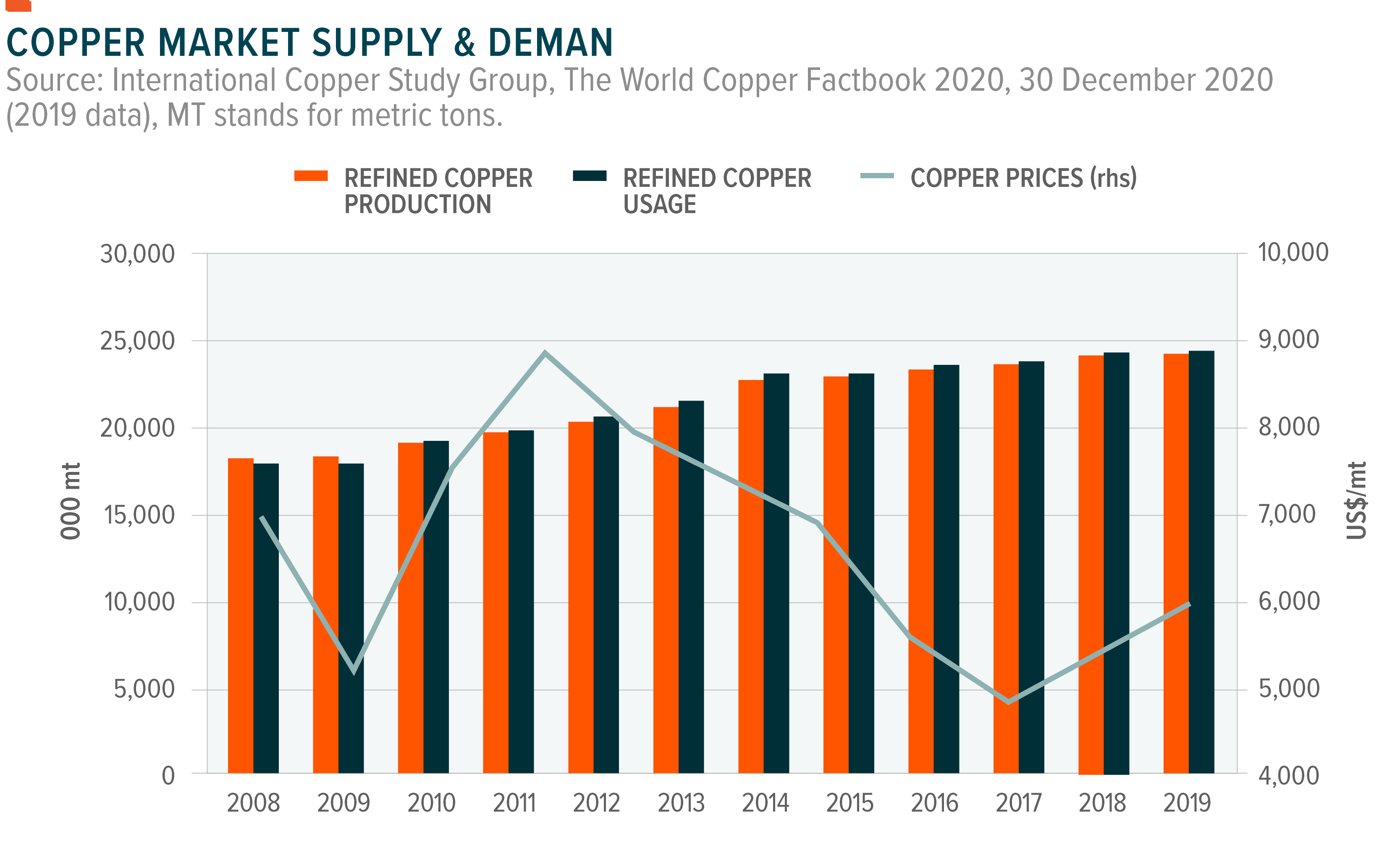 How Can One Invest in Copper?

As with many commodities, there are a variety of investment approaches to gain exposure to the metal, each with their own potential benefits and trade-offs. A few common approaches include: