As the name suggests, lithium is an essential material used in lithium-ion batteries, which play an increasingly important role in areas like electric vehicles and renewable energy storage. The growth of these industries and their dependence on batteries is driving unprecedented demand for lithium, causing lithium miners and battery producers to rapidly scale operations. Despite the excitement around this natural resource, lithium contracts do not trade transparently on futures markets (like gold or oil), and therefore finding information and investing in the metal can be more nuanced than with other commodities.

What is Lithium and How is it Used?

Lithium, the world’s lightest metal, has been dubbed “white petroleum” due to its color and common usage in state-of-the-art batteries powering a range of devices and vehicles. As demonstrated in the table below, lithium-ion is generally lighter, more efficient, and more durable than competing battery chemistries. This makes it a desirable choice for energy storage, particularly in vehicles and consumer electronics where weight and heavy usage are significant considerations. These applications can include electric and hybrid vehicles, scooters, smart phones, laptops, power tools and cameras, among other things.

It is important to note that despite lithium’s common association with batteries, around half of current lithium demand comes from industrial applications, such as glass, ceramics, lubricants, and casting powders. However, much of the expected demand growth and optimism for lithium comes from the battery segment. Approximately 90% of lithium demand is expected to come from the battery segment by 2030.

What is Driving Lithium Demand?

Within the battery segment, the most significant opportunity for lithium demand growth comes from electric vehicles (EVs). The average electric car uses over 5,000 times more lithium than a smartphone to power the vehicle’s range. Higher range electric cars with greater battery energy density, like the Tesla Model S, can use as much lithium as 10,000 smartphones.1 Therefore, growth of the electric car market will have a profound impact on total lithium demand.

According to SignumBOX, lithium accounts for less than 3% of the total costs of a lithium-ion battery.4 Given its relatively small influence on a battery’s economics, overall lithium-ion battery prices could fall from gains in production efficiencies even if lithium prices increase. Battery manufacturers rely heavily on economies of scale to improve operational efficiency and enhance battery designs. Alongside increasing output, battery prices fell by an average of 22% annually over the last 10 years.5 Lithium-ion battery prices should continue this trajectory, causing EVs to become increasingly competitive with their internal combustion engine (ICE) counterparts, which in turn is likely to cause a surge in demand among mass market car buyers.

Where Does Lithium Come From and How is it Mined?

Lithium deposits are most prevalent in South America, particularly in Bolivia, Chile, and Argentina, which together are responsible for more than half of global lithium resources.6 Australia and China are two other countries with large lithium reserves, controlling approximately 14% and 8% of the world’s deposits, respectively.7 Currently, production in the lithium market operates under an oligopoly-like structure, with only a few companies controlling most of the supply. However, new market participants have entered over the last few years, seeking to capture a piece of the rising demand. 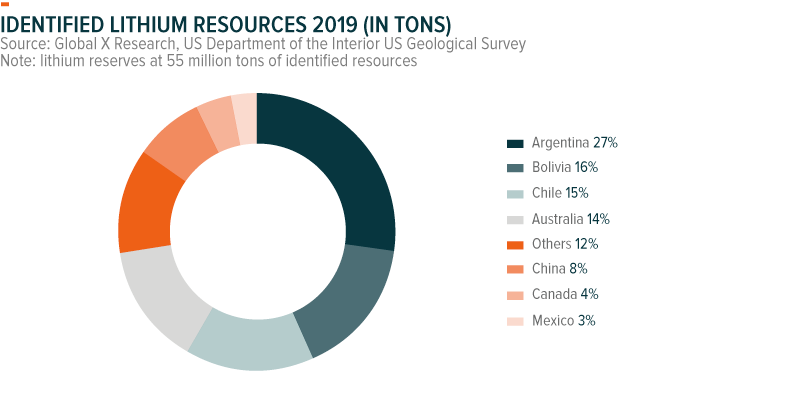 Based on production estimates by existing producers, there is expected to be a shortfall in the supply of lithium in the mid-2020s, as shown in the chart below. Historically, supply shortfalls in a commodity lead to upward pressure in the underlying resource’s price. Estimates place the world’s lithium reserves at 55 million tons of identified resources but given the time it takes to bring a new project to market, supply and demand forces could push medium-term lithium prices higher.9 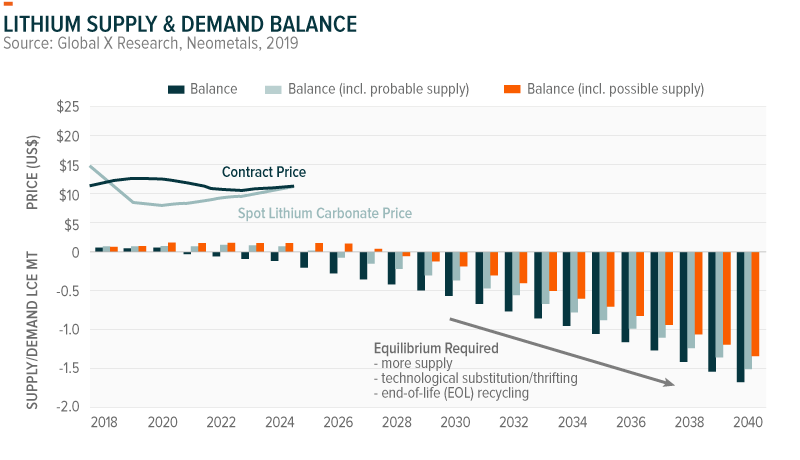 What is the Impact of the Growth of Battery Megafactories in Lithium?

The term ‘megafactory’ has become a battery industry buzzword to describe enormous lithium-ion production plants, that turn raw materials into finished batteries and typically have an annual output greater than 1 GWh. For context, 1 GWh is equal to the battery capacity required to supply approximately 20,000 Tesla vehicles.

With Tesla’s announcement of their 4th battery megafactory, the total number of battery megafactories around the world should reach 115.10 Combined, these megafactories are expected to produce over 2,000 GWh annually by 2028, almost 7 times current capacity levels, representing enough capacity to manufacture 40 million EVs.11 At this planned capacity, the industry would require at least 1.6 million metric tons of lithium each year, raising the question of whether the lithium industry will be able to meet expected demand.12 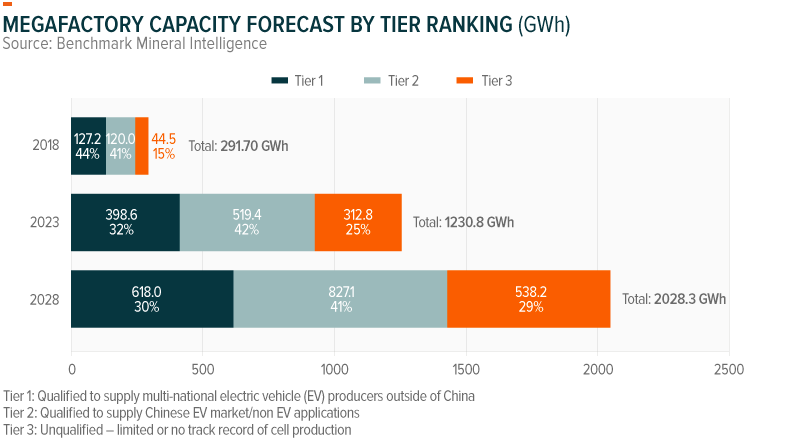 Effective battery production has proven to require expertise, consistent access to key raw materials, and scale. Therefore, auto manufacturers around the world typically rely on third party battery manufacturers rather than making the batteries in-house. There are a few exceptions though. Companies like Tesla, jointly with Panasonic, designed and engineered their own batteries. BYD, the Chinese automaker, is another example of an EV company that builds its own batteries.

What are the Potential Future Prospects for Lithium?

There are three important trends that could continue to provide support for lithium and battery demand growth over the coming years:

How Can One Invest in Lithium & Batteries?

Unlike most commodities, lithium does not trade on a futures exchange. Therefore, measuring changes in spot lithium prices or betting on future price changes must be done through other means. One way to achieve this exposure is to invest in companies involved in various parts of the lithium cycle, which includes lithium mining, refining, and battery production.

2. Note: 2030 estimate from IEA most conservative scenario of 23 million EVs sold by that year. Lithium demand estimates based on 62,000 grams of Li per EV forecasted.

9. US Department of the Interior US Geological Survey, (n7).

11. Note: Estimate of 40 million EVs based on a 50 kWh battery capacity per vehicle. Battery capacity may or may not increase in the future, impacting the estimated number of vehicles that could be produced based on the battery megafactories’ capacity estimate.