For the first time in history, all the world’s major economies have initiatives ready that can support digital innovation and progress toward a net zero economy. This structural shift will profoundly change the way we work, live, and invest. A global technological revolution with sustainability a major focus is no longer seen as a black swan event, but rather a near-term reality with the potential to disrupt traditional sectors. This blog focuses on Europe’s digital and clean transition and details the themes that will play a pivotal role in building economic resilience across the region.

Europe has unveiled multiple fiscal plans to support the COVID recovery and its green and digital transition. Combined, the Multiannual Financial Framework (MFF) for 2021–2027 and the Next GenerationEU (NGEU) represent about €2 trillion of spending over the next seven years.1 One third of these investments will finance the European Green Deal, an ambitious project that aims for the European Union (EU) to be carbon neutral by 2050. Achieving this goal requires a major overhaul of European infrastructure, spanning energy production, food consumption, transport, manufacturing, and construction.2

Companies like these are involved in the construction and engineering of infrastructure projects, raw materials production, composites and products used in building infrastructure, heavy equipment production and distribution, and the transportation of materials. In addition, multinational companies such as US Industrial Caterpillar derive more than half of their revenue outside of the US. As a result, these companies are less likely to benefit from specific macro level trends like the US infrastructure bill.3

Currently, annual investment in European Union (EU) infrastructure is at 2.5% of GDP, which is 20% below its pre-2008 Global Financial Crisis level.4 The European Investment Bank (EIB) estimates that European infrastructure requires roughly 4.7% of the EU’s GDP annually to bring energy, transport, water and sanitation, and telecom services up to modern standards.5 Compared to the global infrastructure investment needs that range between 3.9% to 9.7% of GDP annually, the EU’s are on the lower end of the spectrum. However, several regional disparities within the EU potentially mask its actual needs. In recent years, Western European countries’ investments in infrastructure have been relatively lower than those in Central and Eastern Europe.6 Persistent underinvestment in infrastructure for much longer could have long-term negative impacts on potential growth and productivity, which makes these fiscal plans so consequential. 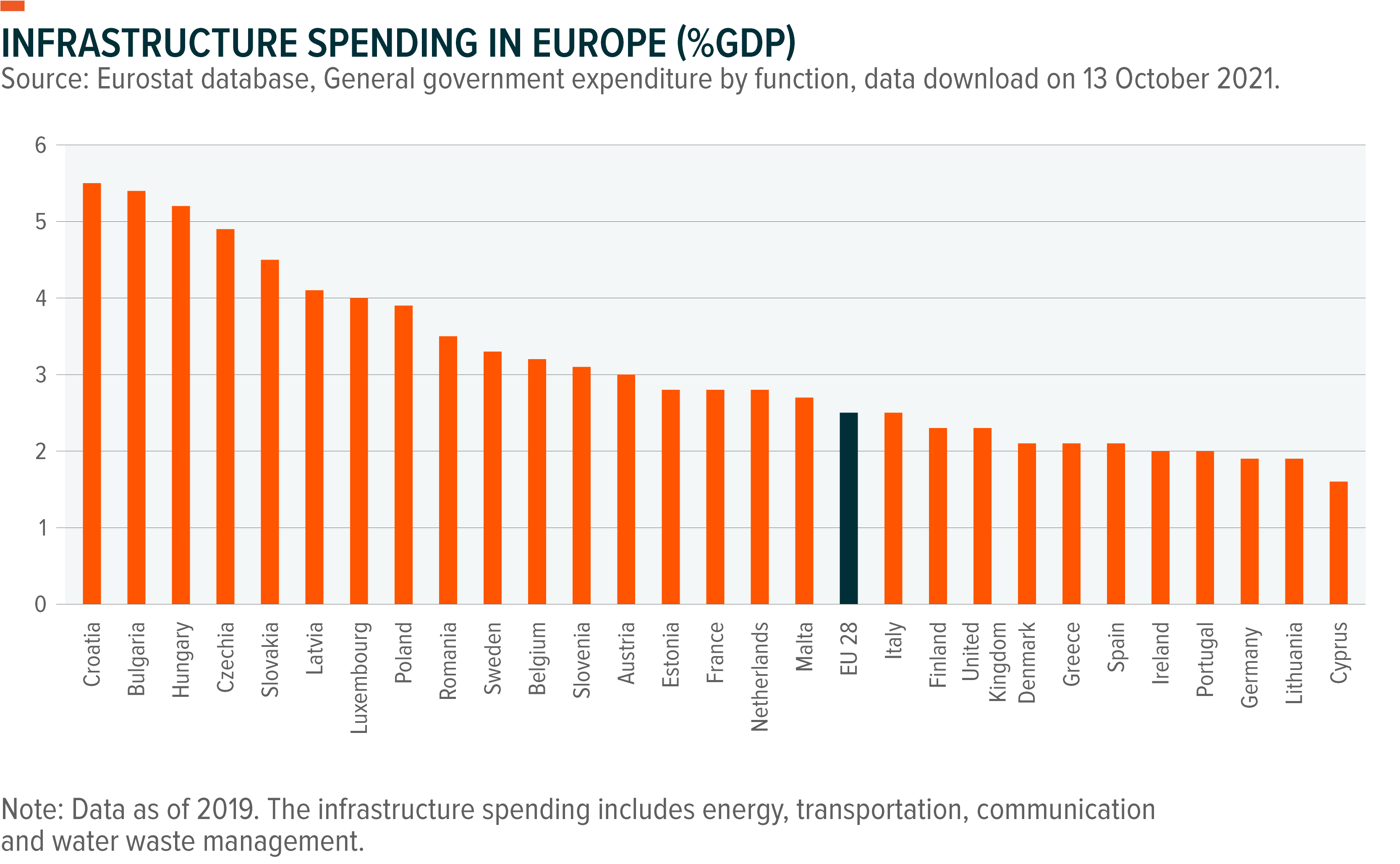 At the centre of Europe’s green plans is the European Commission (EC). It intends to reduce greenhouse gas emissions by supporting industries within the energy and ecological transition sectors, such as CleanTech and Renewable Energy. The President of the EC, Ursula Von der Leyen, insists on “building a Green Europe, which protects our climate and our environment, and which creates sustainable jobs.”7

In 2020, Europe’s green transition achieved an important milestone. For the first time ever, renewables beat fossil fuel power plants for the most share of electricity produced, 38% to 37%.8 Germany, Spain and the UK led the way. The electricity generated by wind and solar rose 9% and 15%, respectively, while bioenergy and hydro generation growth stalled. Wind and solar generation must nearly triple from 38 terawatt-hours (TWh) per year in 2020 to 100 TWh per year to reach Europe’s 2030 green deal targets.9

Thirty-seven percent of the €724bn Recovery and Resilience Facility, the centrepiece of the NGEU, or about €266bn, will be allocated to climate change initiatives aligned with the Paris Climate Accords. The goal is to achieve carbon neutrality by 2050.10

The key areas of investment include:11

To prevent greenwashing, a marketing technique that makes a company seem greener than it actually is, the EC implemented a taxonomy in November 2020 to classify economic activities according to their ecological impact. It also uses this taxonomy to direct investments towards projects it approves as “sustainable.” For example, the EC green label introduces the limit of 100 grams of CO2 emissions per kilowatt-hour, which a transitional energy like natural gas exceeds.12

However, nuclear energy could receive the green label with the support of many nuclear-powered countries, including France. In addition to being carbon-neutral, nuclear energy could protect European consumers from rising gas prices.13 Nuclear power suffers from a poor reputation, but it emits less carbon than fossil fuels and even solar power because its only direct emission is water vapour from a plant’s cooling system. Under the current taxonomy, nuclear energy received the “does not harm” label, which means that it is not yet eligible for investments with lower tax rates. The EC is expected to update its list of climate-friendly energy sources by year-end. If it deems nuclear green, it could trigger increased uranium demand from the EU, giving the nuclear sector a competitive advantage in green finance.

The International Digital Economy and Society Index (I-DESI) measures the digital performance of the EU’s 27 member states compared to other major countries around the world. Measures include connectivity, digital skills, use of the internet, integration of digital technology, and digital public services.14 A 2020 study by the EC concluded that the digital economy among the 27 EU is smaller than that of the US, Japan and the UK.

However, countries like the Netherlands, Denmark and Finland are on par with the US in terms of total digital advancement. The US outperformed its global counterparts across all categories except for connectivity. In region, most Eastern European countries lagged their Western European counterparts. In terms of connectivity, digital public services, and digital skills, the EU 27 compares well with non-EU countries. On integration of digital technology, the EU 27 average is below that of the US, Japan, and the UK. 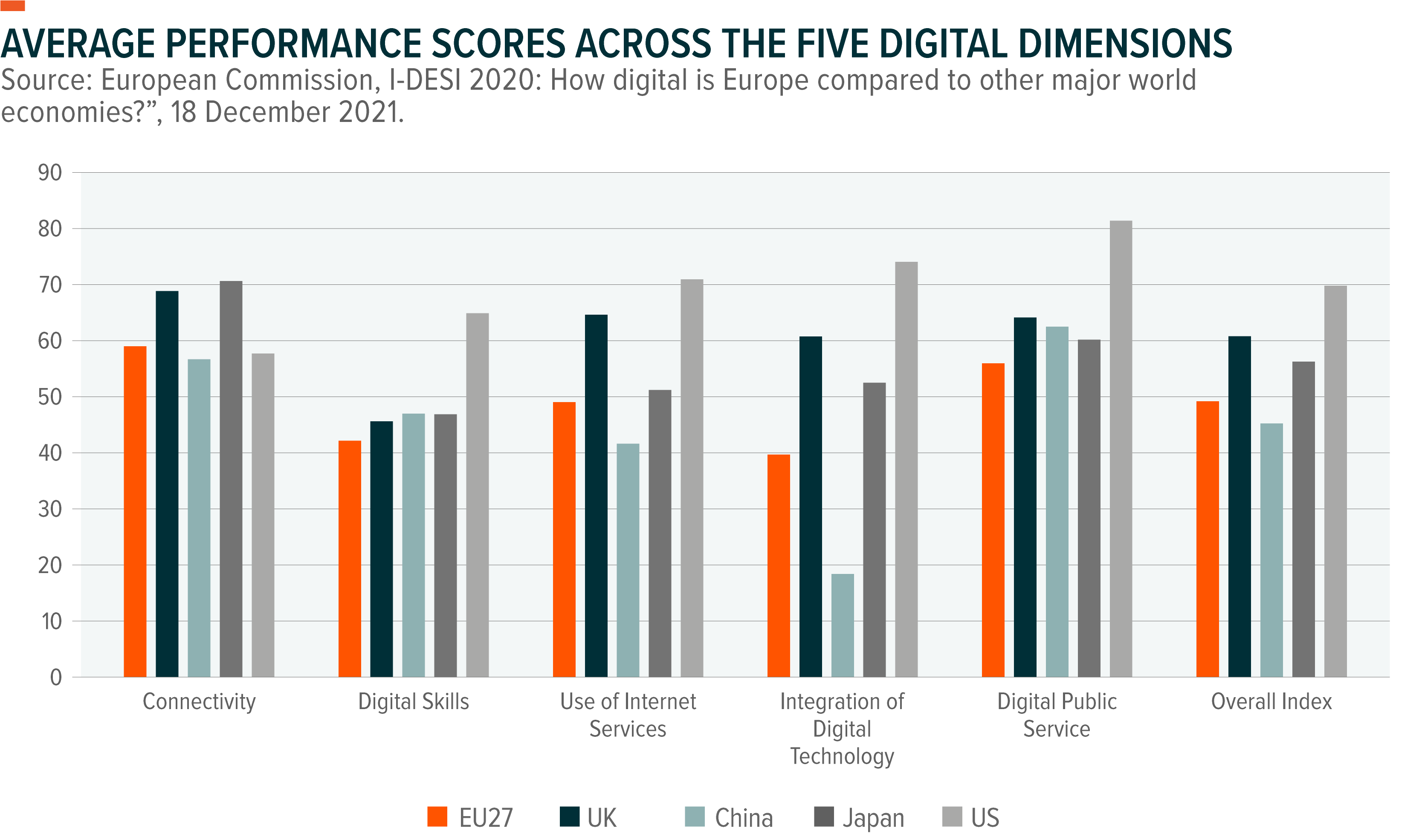 At least 20% of the Recovery and Resilience Facility, or about €145bn, will be allocated to support the digital transition.15 The EU is also pursuing its objective to become a global role model for the digital economy by developing international standards.

The key areas of investment include:16

The EC has also worked with partners in the automotive, renewable energy, defence, and aerospace sectors to create a list of critical raw materials (CRMs). Securing a sustainable supply of these CRMs will be essential to the European Green Deal and supporting economic circularity, which is when products, materials, and energy stay in economic systems for extended periods.

These long-term infrastructure initiatives are likely to result in an overhaul of Europe’s physical structures, transportation, and next-generation projects like clean energy and digital infrastructure. The initiatives will likely require extensive raw materials, including aluminium for construction and transportation; cement, a key ingredient for making concrete; copper for electrification; and lithium for energy storage. Infrastructure investments typically have a long duration and provide opportunities for portfolio diversification because of the low correlation of returns with other assets.

The massive fiscal spending will likely boost demand in the short term, but more importantly, it will provide the perfect backdrop for the adoption of other disruptive technologies over the longer term.

The €8bn Digital Europe programme will support the strengthening of digital capacities for high-performance computing, AI, and cybersecurity, along with advanced digital skills and the accelerated adoption and best use of digital technologies.27

The €86bn Horizon Europe funding programme for research and innovation will promote research in climate change, healthcare, and technologies to improve resilience. Europe is building on recent momentum to continue digitalising healthcare. The European Programme of Work for 2020–2025, called United Action for Better Health, sets priorities for the future of healthcare in Europe and identifies digital health as key to realising this vision. As part of its COVID response, the EU also created the €5bn EU4Health Programme to continue Horizon 2020’s work.28

Unprecedented fiscal stimulus will pave the way for Europe to upgrade its physical infrastructure, increase its clean energy capacity, and deploy large-scale connectivity to support its efforts to expand digital infrastructure. The US and China have similar ambitions about innovation, resilience, economic circularity, and climate-friendly policies. Investing in digital and green transitions through a thematic lens means targeting companies poised to directly benefit from the materialisation of these global themes, independently of any geographic or sector allocation.