Not too long ago many described IT as a back-office function. Yet in today’s hypercompetitive markets, effectively leveraging technology is critical to ensuring a company’s ability to improve customer engagement and operational efficiency. As such, an ongoing wave of innovation in enterprise IT is fundamentally changing how companies manage every aspect of their business, from sales and marketing to recruitment, risk management, R&D, logistics and much more. At the crux of this disruption is cloud computing, which is among the most significant business transformations since the launch of the worldwide web and the adoption of email.

Cloud computing describes the availability of IT services (see Table 1), from basic infrastructure, such as compute and storage, to application development platforms and specific software applications, that leverage pooled resources and economies of scale. These services are often hosted remotely and accessed directly over the internet. 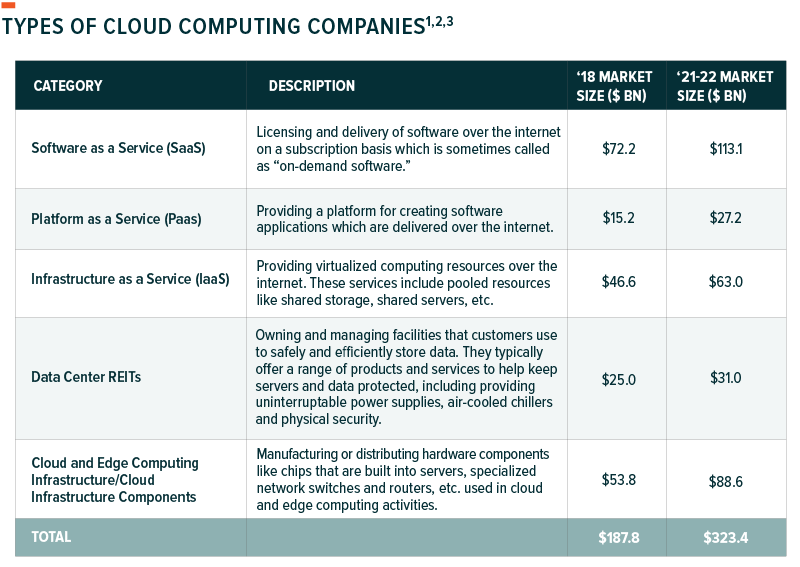 Before cloud computing technology became available, businesses had to manage their IT resources on-site, with local servers, networking equipment, software and people, in a manner that was very capital- and time- intensive without a high degree of scalability. Today, businesses can use public clouds, which are managed off-premises and available to multiple organisations; private clouds, which are created independently and used by a single organisation; or a hybrid approach employing both these models. The continued decline of computing costs and improvements in network infrastructure have also given rise to edge computing, which still distributes IT services but pushes them closer to the end-user, on an edge-device, to minimise latency and reduce costs.

The global cloud computing market is estimated to be worth well-over US$300 billion by 2022, up from about US$188 billion today and growing at a compound annual growth rate (CAGR) of 14.6%.1-3 Cloud computing has been successful in offering companies cost-effective, scalable solutions to the various needs of the IT estate, and thereby the overall business. Further, it has proven to be a critical launching pad for other emerging technologies expected to be integral to 21st century innovation, such as artificial intelligence and the internet of things. And while cloud computing is primarily a business innovation, it has had massive implications for how products and services are delivered to customers, from social media and video streaming to education platforms and gaming.

To better illustrate the expected disruptive implications of cloud computing, we explore the key underlying factors driving its historical growth.

1. Attractive financial model4: Users of the public cloud generally pay a recurring subscription fee based on usage, offering a more predictable, service-oriented model for consumption of IT resources. With the public cloud, companies pay substantially less up-front costs for capital investment and are free of the burdens associated with continued ownership by outsourcing the management and delivery of those services to a third party. Cloud computing therefore has offered ease of scalability and flexibility, allowing businesses to expand or contract their use of IT resources based on need. It also avoids traditionally high-switching costs associated with modifying or refreshing one’s IT infrastructure. Importantly, continued reductions in the cost of compute and storage (see figure below) as well as improvements in virtualisation technology, have enhanced the benefits of economies of scale and made investment in large public clouds even more attractive.

2. Ease of management: In addition to the attractive purchasing model, cloud computing simply requires less upkeep. Continued maintenance, as well as other critical services such as colocation and security, are handled entirely by the third-party cloud computing providers. Internal IT personnel who previously spent hours adding new servers and rerouting network equipment locally now have ample free-time to focus on more-growth oriented activities, such as building better applications and optimising them for business use, from customer facing apps to internal data management services.5 The figure below, for example, illustrates the hidden costs of hosting software on-premises relative to use of a public cloud.6 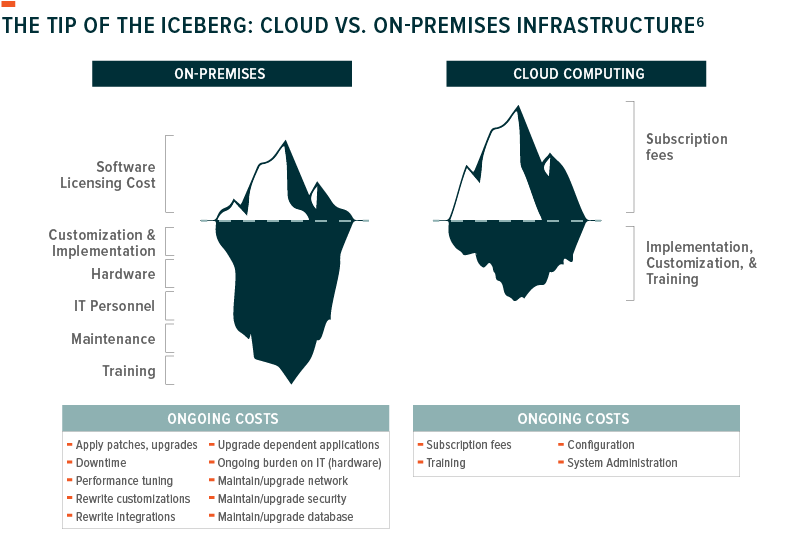 3. Flexibility of use cases: Cloud computing encompasses a large market with vast subcategories. IaaS, PaaS, SaaS are distinct markets that each offer their own set of products and services. IaaS is the most straightforward, eliminating the need for compute and storage on-premises. PaaS allows software engineers to spend less time trouble shooting, and more time developing better apps. And while a select few companies have dominated IaaS and PaaS, SaaS is the easiest for new market entrants, many of which are now rushing to fulfill different business needs with function-specific software, delivered as service. Such tools can range from cloud-based enterprise resource planning (ERP) systems to customer relationship management (CRM), videoconferencing, and other collaboration services.

4. The power of the platform: Cloud companies, especially first movers, have and are expected to continue to benefit from economies of scale and network effects. More users of the public cloud create greater demand for scale. Greater scale, in turn, implies greater cost efficiencies and barriers to entry. This dynamic should continuously enhance the value of the service, especially at the IaaS level. The benefits of the network effect are, however, still applicable to SaaS companies as well. For example, consider an email security application delivered via a SaaS model. As the company acquires more users, it can gather threat intelligence data from all its customers to continuously monitor cyberattacks, update its platform, and take appropriate preventative action on behalf of any of its users.

5. Interoperability: The ability to interconnect various types of hardware and software from a variety of vendors, and in turn use the system with minimal reconfiguration or disruption has historically been among the greatest pain points for IT administrators. Data centers can employ many kinds of network protocols and proprietary hardware and software. Engineers often spent hours trying to get the different packages to all work together seamlessly and were required to essentially create custom-built IT systems. Cloud computing, however, streamlines that process entirely by delivering IT services directly over the internet without any concern for the interoperability of on-premises infrastructure. And while some organisations, particularly large multinationals, will employ private cloud approaches for mission-critical applications, it is increasingly easy for companies to employ a hybrid approach, using public cloud services in tandem with some on-premises resources for certain functions.

6. Enabling emerging technology: Cloud computing provides the scalable resources to gather, analyse and store all kinds of data used for a variety of advanced applications. Indeed, cloud computing offers the necessary infrastructure to ingest and process the big data collected from the internet of things, as well as the compute power needed for artificial intelligence and deep learning. Further, as more devices are connected to the internet, including advanced tools like robots and autonomous vehicles, cloud is expected to be a foundational resource for delivering IT services to those end-devices in an efficient and cost-effective manner. In the same way, consumers should increasingly engage with cloud-enabled streaming services, such as augmented and virtual reality (AR/VR), gaming and social media. 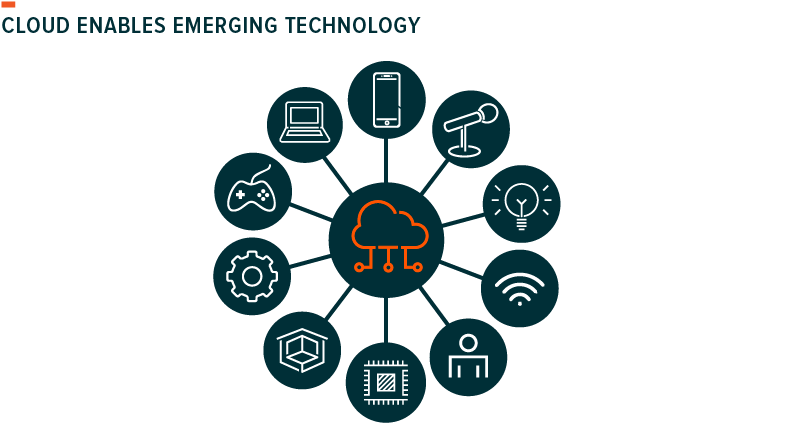 While cloud computing is increasingly the option of choice for companies of all size, its adoption is still relatively early. Surveys of IT decisionmakers indicate that nine of ten companies have at least some of their applications or infrastructure in the cloud in 2019, with those remaining expected to adopt cloud services by 2021.7 The average IT environment today, however, is still majority non-cloud. This share is expected to continue shrinking in the years ahead. Just in the last two years, the average company’s cloud spending budget, including both enterprises and small businesses, jumped 36% from US$1.6 million in 2016 to US$2.2 million in 2018.

Modern technology’s influence over all aspects of business operations have thrust chief information officers into boardroom conversations and cloud computing into the spotlight. Given its central role in attempting to optimise the productivity and scalability of a firm’s technology resources, cloud seems to ultimately be a foundational tool for enterprises of all sizes.

Capital at risk. The value of your investment and the income from it will vary and your initial investment amount cannot be guaranteed. A Prospectus and Key Investor Information Document (KIID) for this scheme is available in English at globalxetfs.eu