Infrastructure is a key component of the US economy: it provides jobs, it facilitates commerce, and it includes cities, towns, roads, bridges, ports, and airports. The global pandemic and new potential public sector spending initiatives will continue impacting most facets of life in the US for the foreseeable future.1 Infrastructure is no exception. The need to rebuild America’s infrastructure is still as acute as ever, but with new government leadership, low interest rates, and the dark cloud of the pandemic remaining, the way we build may differ.

How Important Is Infrastructure to Economic Growth?

Infrastructure includes highways, streets, rail, transit, airports, seaports, waterways, waste management, power grids, communications equipment, and pipelines. Infrastructure is the backbone to any economy as it facilitates the movement of goods and labour, which allows for greater competition, higher productivity, and reduced costs. Therefore, many economists believe that increases in public or private spending on infrastructure development can significantly boost economic growth. According to research from S&P, a 1% increase in US infrastructure spending as a percentage of GDP translates to a 1.7% increase in GDP over the next three years, or a 70% return on investment.2

What Is the Current State of the US’s Infrastructure?

The US’s infrastructure, which was largely built in the post-WWII period of the 20th century, is rapidly aging, while suffering from a shortage of funding required to maintain these assets. While spending on infrastructure construction has nominally increased at an annualised rate of 2.5% over the last ten years, it has actually increased at an annualised rate of 0.7% once controlling for inflation.3 These numbers tell an even more troubling story when broken into various segments of infrastructure. In the chart below, note that the Transportation and Power segments are the only category demonstrating a significant real construction spending growth over the period.

ASCE analysis indicates that current levels of funding will be available to cover only 57% (approximately US$3.5 trillion) of these needs through 2029, and 56.6% (US$7.3 trillion) by 2039 for the aggregate of surface transportation, water transportation, airports, water, wastewater, and electricity systems.

How Will the Pandemic Change Infrastructure Plans?

The longstanding structural trend of urbanisation is an important input for infrastructure development plans as more densely populated cities and expanding urban sprawls require accommodative physical structures. COVID-19 introduced a headwind to this trend. Faced with global stay-at-home and social distancing orders, many are evaluating whether urban living presents the same appeal as it once did. Though a pandemic-driven urban exodus didn’t occur en-masse, many of the US’ largest and densest cities like New York and San Francisco saw heightened migration during the pandemic. This does not mean that cities will cease to exist, but the distribution of populations across major cities, satellite cities, and suburban towns could evolve, placing different demands on physical and digital infrastructure:

What Does a Biden Administration Mean for Infrastructure Development?

U.S. President Joe Biden ran on a platform that featured aggressive infrastructure investment as a key pillar of economic policy and potential COVID-19 recovery efforts. In March, these plans became clearer in the form of the American Jobs Plan, which outlined key areas of infrastructure the Biden Administration hopes to see of investment across. Much of the plan is covered by the below:7

Buildings, Schools, and Hospitals: Other efforts to revitalize physical infrastructure encompass funding for commercial buildings, homes, schools, and hospitals. In particular, the plan seeks to build and retrofit over 2 million energy-efficient electrified buildings and improve education infrastructure by modernizing schools and college.

Infrastructure Resilience: President Biden’s plan highlights the importance of ensuring that existing and new infrastructure is resilient to climate risk, natural deterioration, and obsolescence. Investment areas in this vein include protection from wildfires, coastal resilience, and research and development in durable advanced materials.

CleanTech and Clean Energy: The Plan specifies investment in expanding electrification and energy efficiency in buildings, homes, schools, and hospitals, as well as in electric vehicles. The plan highlights President Biden’s intention to catch up with the rest of the world by achieving 100% carbon free electricity by 2035 and putting the country on a path to reach net-zero emissions by 2050.

Water utilities: The plan includes a significant overhaul of the U.S. water utility infrastructure to improve the safety of drinking water. It seeks to invest in replacing 100% of all lead pipes and service lines that deliver drinking water and upgrading treatment plants and systems.

Digital infrastructure: The plan also seeks to expand internet infrastructure, covering 100% of the country with high-speed and future-proof broadband.

How Close is the U.S. to Making Infrastructure Investment a Reality?

Infrastructure dominated the national conversation in the U.S. since President Biden outlined the American Jobs Plan in March. In August 2021, the U.S. Senate passed the US$1.2T Infrastructure Investment and Jobs Act across bipartisan lines, after months of deliberation. The bipartisan bill features US$550B of new spending across transportation and transit, clean technologies, water infrastructure, digital infrastructure, and infrastructure resilience, with remaining spending coming from existing infrastructure funds and repurposed funds from other areas. The bill is part 1 of 2 pieces of potential legislation drafted in the spirit of President Biden’s physical and social infrastructure agenda as articulated by the American Jobs Plan and American Families Plan. Part 2 of this agenda could come in the form of a partisan US$3.5T budget reconciliation bill, which would invest in education, affordable housing, clean energy, and health care, among other areas. A preliminary budget resolution that would allow such a bill to pass along single-party lines has already been adopted by both houses of Congress. As of the end of August, the Senate is drafting the reconciliation bill for a possible vote in late-September or October. Given this timeline, the House intends to vote on the bipartisan bill by September 27th at the latest, potentially meaning that President Biden could sign both, or least one, of the bills into law in the coming months.

The sum of new spending across the resolution and bipartisan bill pares in comparison to the combined US$4.1T number from the American Jobs Plan and American Families Plan announced in March/April. Progressive Democrats in the House might be irked by this, but in our view, the spending outlined in the spring was higher than what is realistic in order to accommodate negotiations and compromise. We are encouraged by the significant funding appropriated for clean energy in the reconciliation bill and also expect hundreds of billions of dollars invested in affordable housing, education, and health care to go toward additional physical infrastructure in the form of buildings and clean technologies. 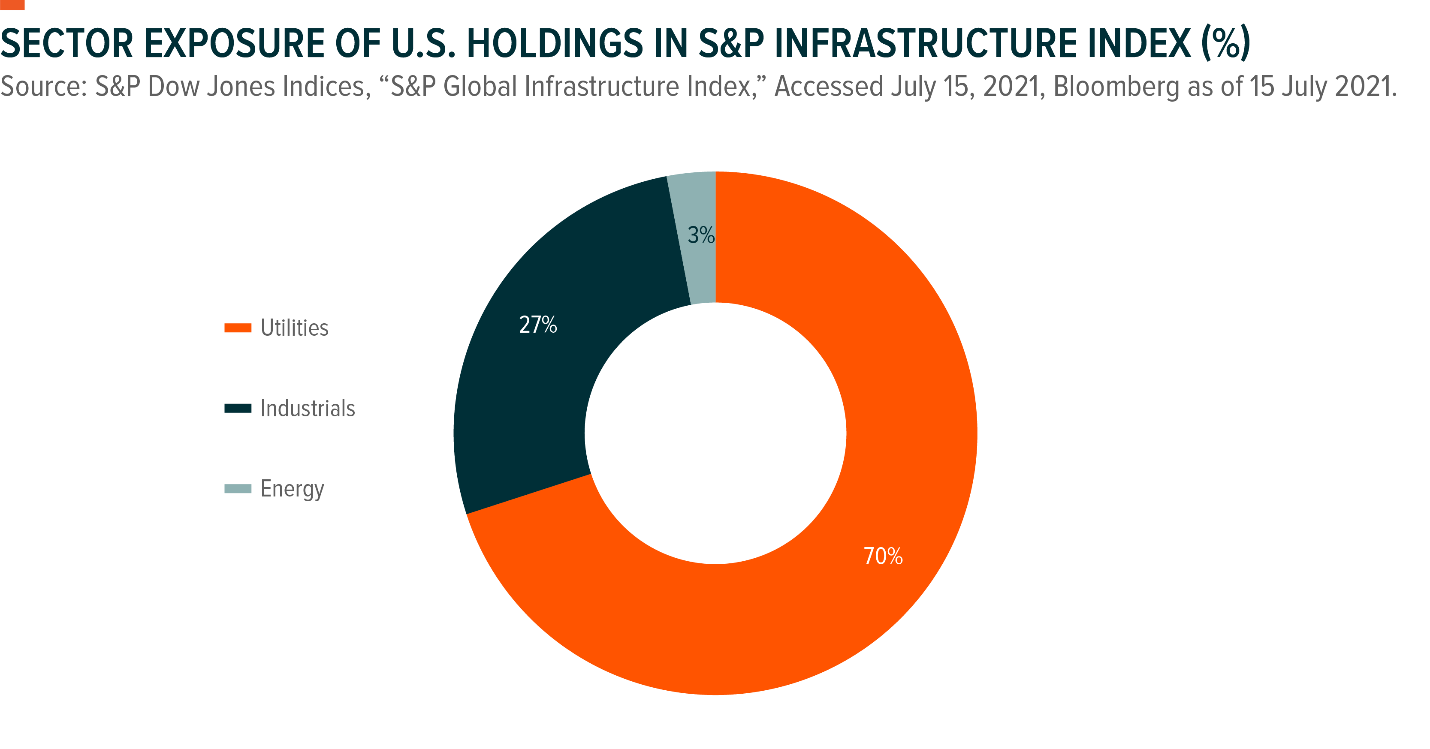 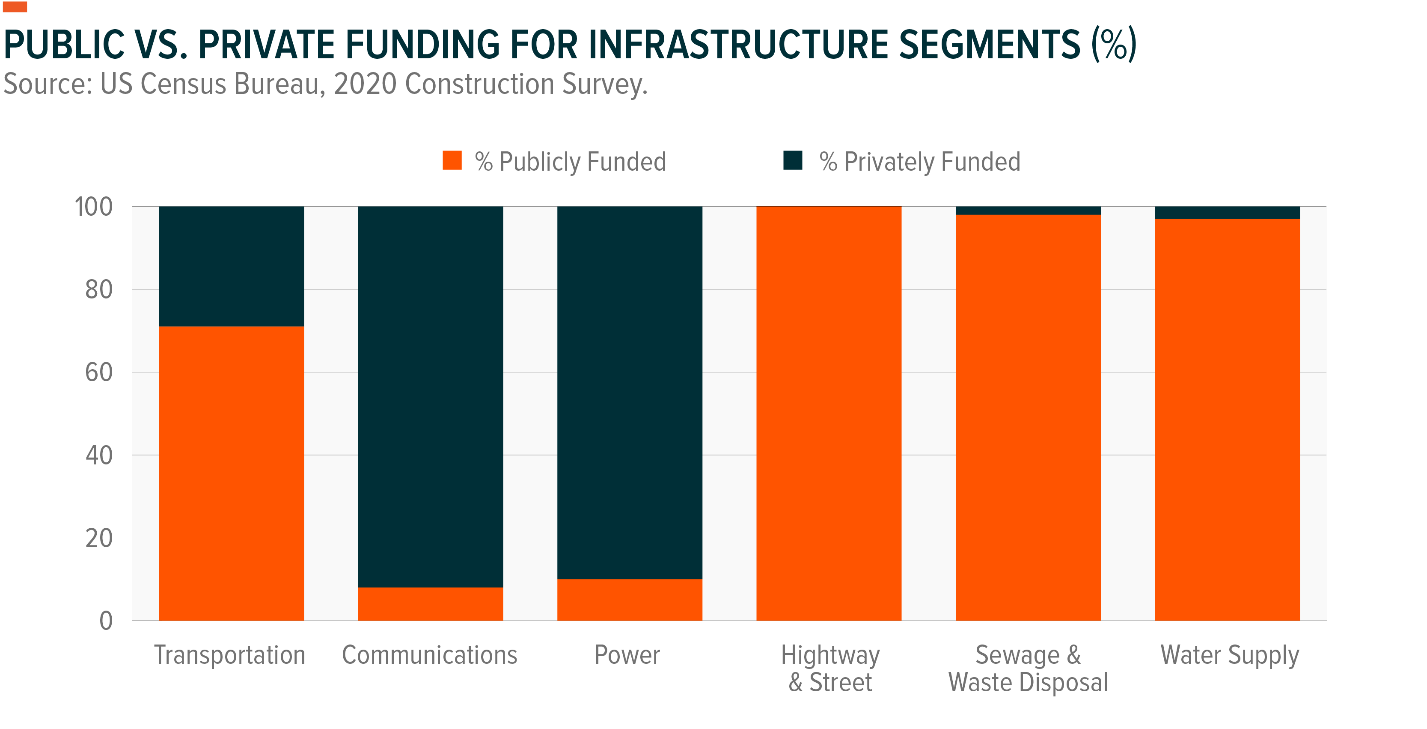 6. Bloomberg Citylab, “NYC Finally Gets On Board With the Subway Car of the Future,” February 1, 2016