Europe is on the front lines of the Russo-Ukrainian war, which continues to disrupt global supply chains that have yet to recover from the pandemic shock. Should the airspace restrictions on commercial flights persist and the cost of commodities continue to rise, the knock-on effects could extend beyond Utilities to Consumer Discretionary and Industrials. Once current inventories are exhausted, manufacturers could be forced to shut down temporarily or reduce production given the lack of supply of intermediate goods and the rising cost of inputs.

The uncertain duration of the war and the risk of sanctions on Russian oil and gas could weigh further on investor sentiment and support sustained momentum in commodity markets. Metals and energy prices have soared, including oil, which hit its highest price level since 2008 with buyers avoiding Russian crude. In this environment, we expect defensive sectors like Healthcare and inflation beneficiaries like Real Estate, Energy, and Materials to be among the sectors that lead gains in the equity market until the end of 2022, at least.

Cyberattacks as Weapons of War: Cybersecurity Can Be a Portfolio Risk Manager

We believe that the Cybersecurity theme can help manage geopolitical risk in a portfolio, as well as idiosyncratic risk linked to companies’ product and supply chain weaknesses. Recent cybersecurity incidents include cyberattacks on Ukrainian banks and government departments and the Moscow Exchange. The EU responded to calls for help from Ukraine by providing a cyber rapid-response team comprised of experts from Lithuania, Croatia, Poland, Estonia, Romania, and the Netherlands, to help defend Ukraine from cyberattacks. In the week following the invasion, the Indxx Cybersecurity v2 Index gained 15.5%.1

Beyond Russia and Ukraine, on February 28, a possible cyberattack on Kojima Industries Corporation, a key supplier for Toyota, forced the carmaker to halt production at 14 of its factories in Japan, representing a third of its production. 2 As a result, Toyota’s stock price fell by -4.7% in Tokyo in the following two days. Meanwhile, the Indxx Cybersecurity v2 Index was up by 2.3%.3 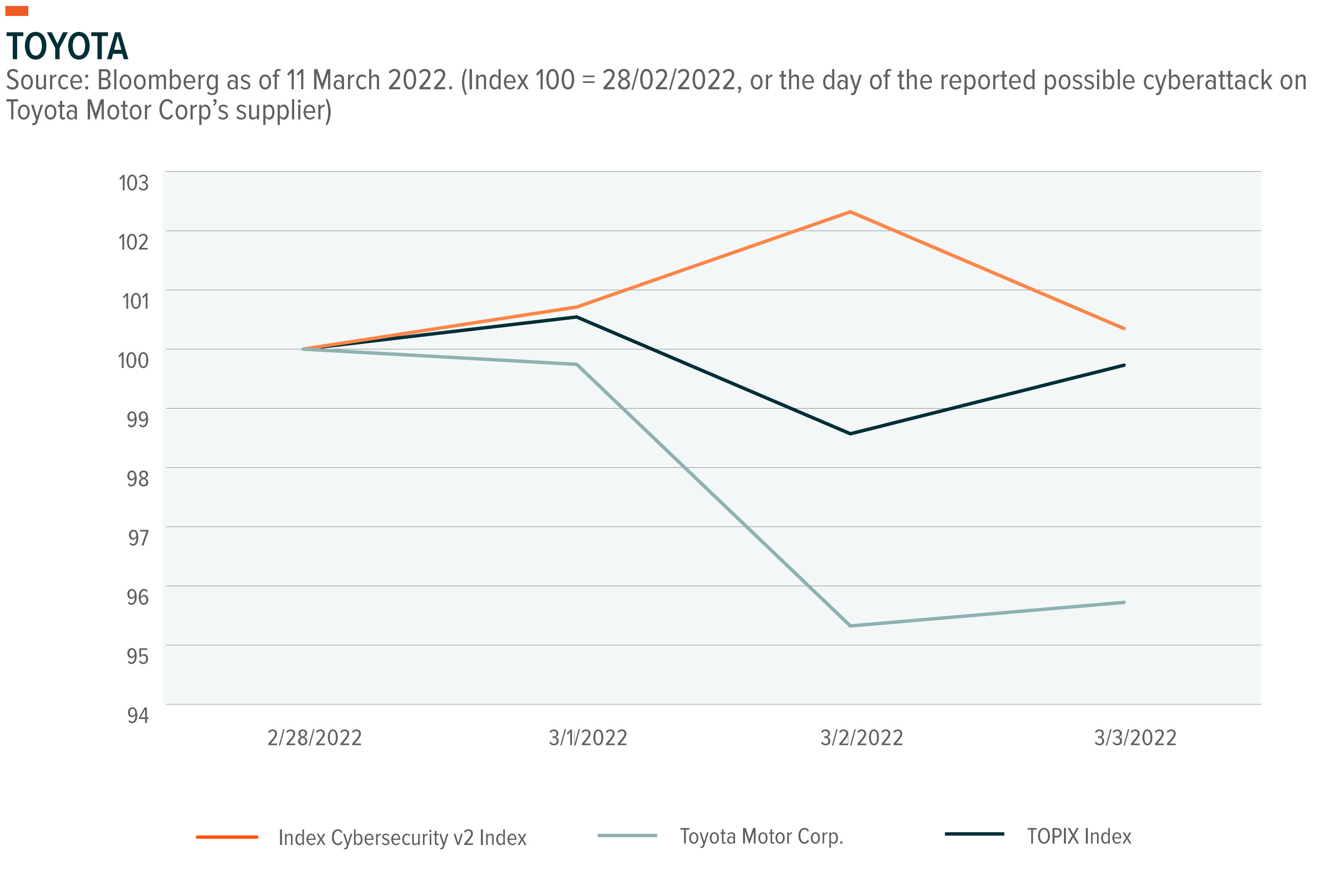 Cybersecurity is a tangential theme, along with Cloud Computing. In our view, cybersecurity and cloud computing stocks are complementary holdings. However, vertical integration with cybersecurity firms could create new growth drivers for cloud companies. In the process, they would make their digital infrastructure more resilient and take ownership of their security rather than relying on external suppliers. Google’s acquisition of Mandiant, a leading U.S. cybersecurity firm, earlier this month is an example.

Cloud computing is a maturing market approaching the late majority phase with a higher number of profitable firms compared to the Cybersecurity theme. Almost two-thirds of the Indxx Global Cloud Computing v2 Index has exposure to profitable firms, compared to 50% for the Indxx Cybersecurity v2 Index. 5 The expected sales growth in cloud computing has been declining steadily since 2021, which reflects a maturing market.

Stagflation or Hyperinflation? The Case for Equity Income Grows

We expect equity markets to be supported by negative real yields as high inflation persists. But we expect them to be limited by rising interest rates, prolonged geopolitical uncertainty, and the potential for lagging negative economic impacts from sanctions and the subsequent retaliations between the West and Russia. This backdrop favours defensive strategies like high dividend strategies and covered call strategies amid a likely rangebound trading market.

Currently, the major Western central banks show more concern about inflation than the potential negative economic impacts of the war on their economies. The European Central Bank (ECB) surprised markets on March 10 by announcing its plans to accelerate its exit from extraordinary stimulus even as the war in Ukraine deepened. Soaring inflation outweighs the ECB’s concerns about Russia’s shock invasion of Ukraine for two main reasons.

First, price stability is the ECB’s unique mandate, and the current inflation pressures are persistent. The ECB’s main objective is to avoid stagflation, particularly because it took longer for Europe’s economic rebound from the pandemic to start compared to the U.S. The second reason is that central banks typically follow reaction functions based on current economic indicators such as inflation and changes in real income, which is the Taylor rule in a nutshell. At this point, it is far too early for central banks to assess and respond directly to the negative impacts of the war because the situation continues to evolve.

Nominal interest rates could rise this year, but real interest rates are still in deeply negative territory, which can create investment opportunities in equity income. Real yields are even more negative amid surging inflation, which is typically viewed as a positive factor for stocks. The war has placed more emphasis on risk management so far, but investor sentiment for stocks could increase even in an extended war scenario, as geopolitical events tend to have a temporary impact on markets.

In equity income, high dividend payers are generally well-established companies with superior pricing power. Companies like these can provide a hedge against inflation because they can charge customers more when input costs rise, and in turn, increase cash flows and earnings as prices increase. Future earnings are typically discounted at a higher rate in an inflationary environment, leading equity returns and inflation to be inversely related. However, dividends can help hold up returns when stock prices decline and reduce the volatility of a stock’s total return. Dividend growth stocks tend to be more valuable in an inflationary environment as investors reward immediate cash (i.e., undiscounted cash flows) and the quality of profitable companies. 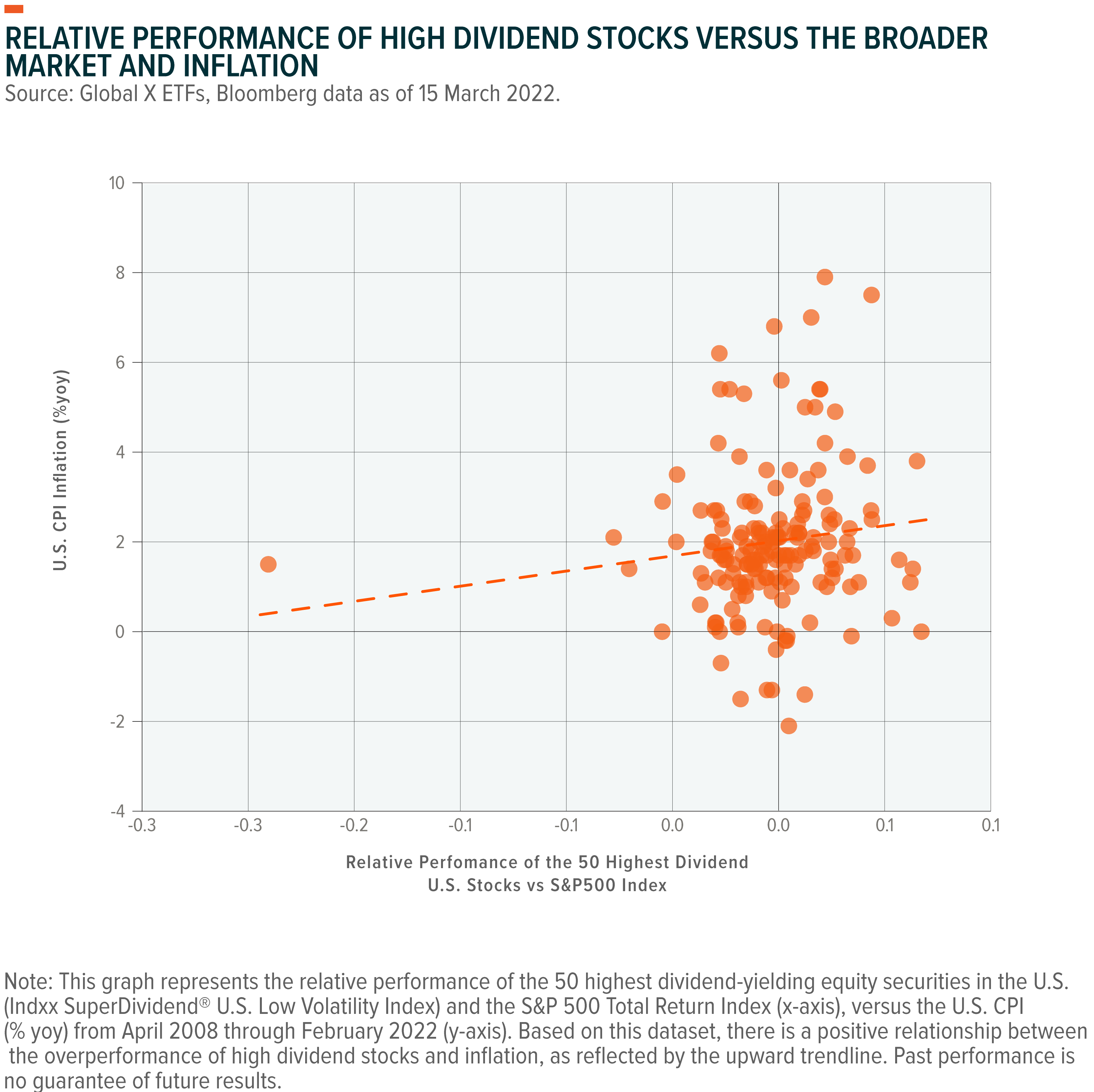 The recent bear flattening of the U.S. Treasury yield curve, where short-term interest rates rise faster than the long end, suggests that markets are increasingly pricing a stagflation scenario. However, in the U.S., the current strength of economic indicators points towards hyperinflation.6 The relationship between U.S. equities and inflation becomes negatively correlated during periods of hyperinflation, which supports the case for a covered call strategy. In a covered call strategy, the income comes from options writing, and therefore diversifying away the risk. This alternative income strategy is more conservative as it provides returns comparable to equities amid rangebound trading market, but generally with lower volatility.

Persistently higher global inflation, the possibility of tightening supply due to geopolitical events, and logistical bottlenecks due to vulnerable supply chains, combined with a V-shaped recovery from the pandemic, are pushing commodity prices sustainably higher. Notably, the nickel price rise comes amid already record-high lithium prices and with cobalt trading at its highest level in three years. As a result, battery cell costs and ultimately electric vehicle (EV) costs are likely to rise in the short term.

Higher cobalt and nickel prices could dampen short-term sentiment towards EVs, but they could push EV makers to use lithium iron phosphate (LFP) battery technology, which does not use nickel or cobalt. The cost advantage of LFP batteries comes from their chemical composition.7 Iron and phosphorus are mined at massive scales across the globe and are widely used in many industries. LFP’s high-power density makes the technology particularly useful in robotics and E-mobility. Tesla’s Q3 2021 report announced that the company plans to transition to LFP batteries in all of its standard range vehicles.

Overall, there are opportunities to invest in lithium and other disruptive materials like graphite or copper, which should benefit from rapidly increasing demand to build the next generation of EVs powered by LFP batteries.8 In addition, oil producers and copper miners may continue to benefit directly from commodity price increases. Copper, a key metal in the energy transition, can benefit from the likely acceleration of renewable energy adoption across Europe.

The energy transition in Europe is more pressing than ever because its economic growth outlook seems increasingly tied to its ability to become energy independent. The EU imports 60% of its energy, making it the largest energy importer in the world. 9 As a result, Russia’s invasion of Ukraine and its effects on energy prices may accelerate Europe’s ambition to reduce its energy dependence on Russia and increase its use of renewables, including nuclear energy.

With 38% of its energy production now coming from renewable energy sources, Europe has already achieved an important milestone in its green energy transition.10 Also, the European Commission gave nuclear energy the green label, despite opposition from Germany. In addition to being carbon-neutral, nuclear energy could protect European consumers from rising gas prices. The EU currently depends on nuclear power for about 25% of its electricity, with more than half of it produced in France.11 Together with countries in Eastern Europe, France is pushing for a swift adoption of nuclear energy. Interest in uranium, nuclear energy’s main fuel, continues to increase, particularly since the invasion. Uranium’s price is up 23% to its highest level since 2011.12

It seems unlikely that Europe stops importing gas from Russia altogether because countries like Germany rely heavily on it. However, highly volatile energy prices could pose a severe economic risk. Natural gas prices in Europe surged to over 220 euros per megawatt-hour in early March, before declining to 120 euros per megawatt-hour by the middle of the month.13 Also, gas inventories in the region are at historically low levels. Europe has increased its imports of liquefied natural gas (LNG) since 2020, mostly from the U.S., which could help reduce the continent’s reliance on Russian gas. However, LNG storage capacity in the region is already stretched.14

The strong market sentiment towards renewable energy strategies, notably hydrogen and solar, could indicate that investors expect a significant shift in the adoption of renewables amid this macroeconomic and geopolitical backdrop. 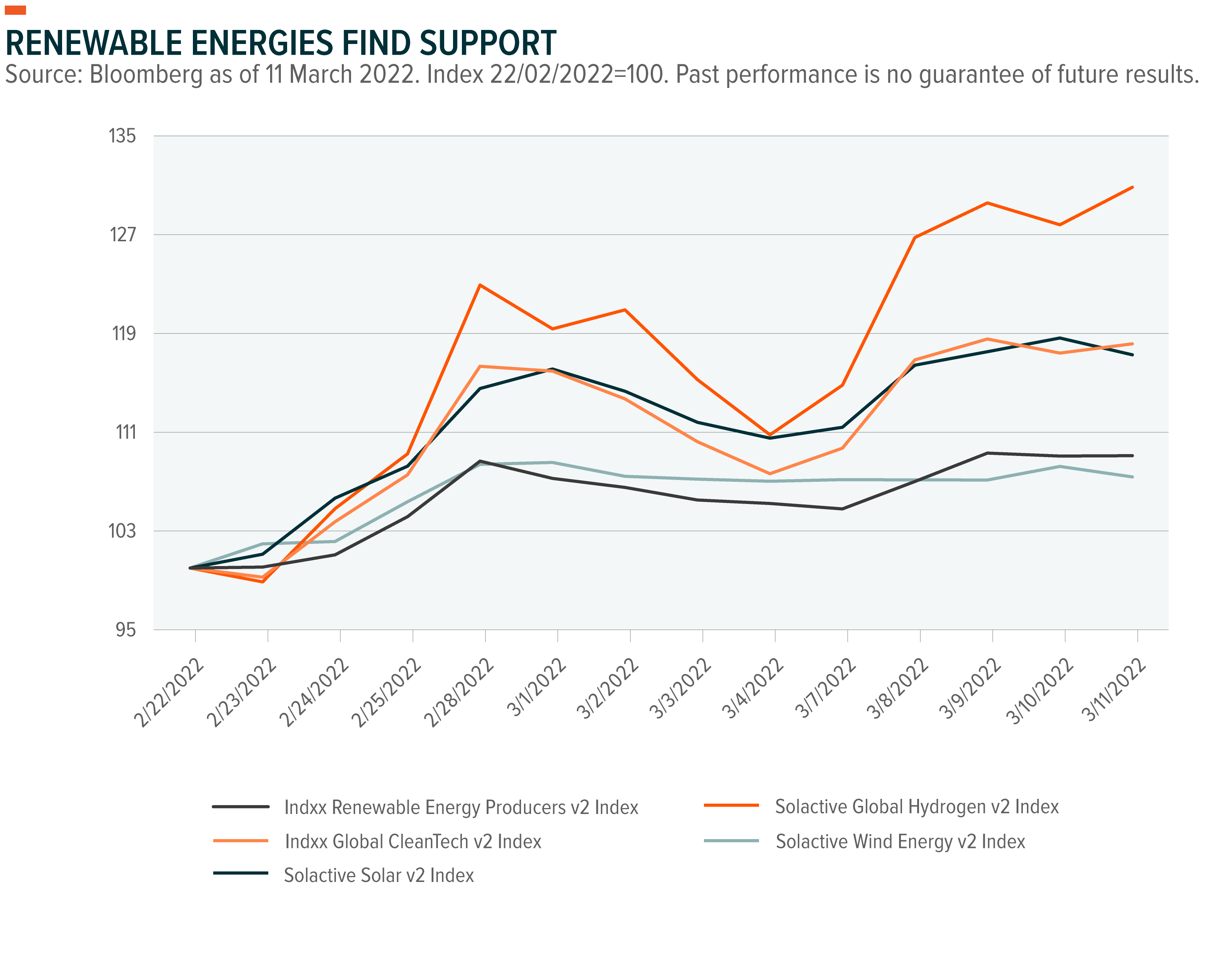 5. All the statistics in this paragraph are the result of Global X ETFs analysis on data extracted from Bloomberg as of  11 March 2022