Autonomous Vehicle (AVs) technology has improved dramatically in recent years, supported by large investments by auto manufacturers, original equipment manufacturers (OEMs), and technology companies. Safety is one gauge of progress, and according to some analysis, AVs can reduce road fatalities by 94%.1 What makes this technology so intriguing is that with artificial intelligence (AI) and machine learning, AVs can improve on a safety metric like this the more miles they drive and the more data they collect. The road to full autonomy and mass adoption remains a long-term proposition, due in part to necessary testing, as well as regulatory and infrastructure uncertainties. However, early commercial use cases with investment implications are already emerging.

AV Technology Advancing, but Work to Be Done to Reach Full Autonomy

Autonomous vehicle technology in the market today ranges between Levels 1 and 3, which incorporates various degrees of basic automation. Level 4 is considered high automation, as the car can control all driving functions and operate without human intervention under certain conditions. As we wrote in The Future of Transportation Is Autonomous & Electric, Level 5 is the holy grail for AV technology because the vehicle requires no human input. Forecasts for when the first fully autonomous cars come to market remain a moving target. Tesla first said it would happen in 2019, and then changed it to 2021, before pushing it to 2022.9 Nissan, Renault, and Toyota believed that they would have Level 5 cars by 2020. Others, such as Jaguar Land Rover and Mercedes Benz, say 2024 and 2025, respectively.10 GM says they will sell fully autonomous vehicles by “the middle of the decade.”11

But even though fully autonomous cars haven’t hit the roads yet, the technology has made significant strides. AVs constantly collect and process billions of data points from an array of cameras with sensors, radar, and LiDar systems, which are much improved and more affordable than earlier iterations. Also, advanced driver-assistance systems (ADAS), including adaptive cruise control and self-parking systems, are now increasingly available in low to mid-range models and not just high-end models.

AVs use the data that they collect to continually improve the AV network’s driving skills and reduce the instances of software disengagement events and accidents. GM’s Cruise can drive 39,002 miles before triggering a disengagement event, which requires the driver or operator to manually take control of the vehicle.12 At current learning rates, by 2030, GM’s AV technology could drive close to 300,000 miles before triggering a disengagement.13 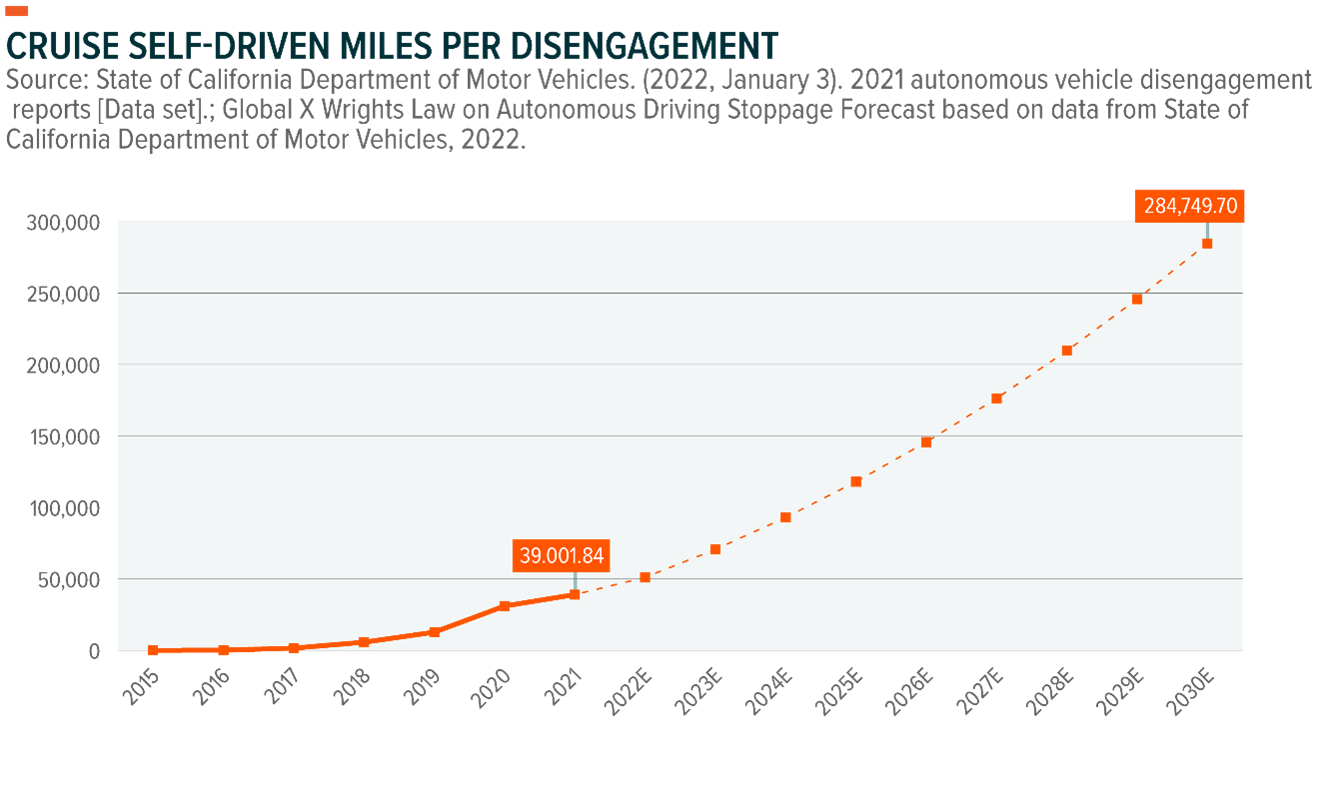 Another way to measure the progress of AVs is by looking at the number of crashes. Tesla’s Full Self Driving (FSD) autonomous vehicle technology is involved in accidents at a rate 10x less than human drivers.14

On the connectivity side, companies debate whether they should deploy dedicated short-range communications (DSRC) or cellular vehicle-to-everything (C-V2X) systems for vehicle-to-everything (V2X) communication.15,16 C-V2X, which first emerged in 2017, is considered better because it can more easily incorporate future 5G-enabled technologies, but DSRC is still more widely deployed.17 Both technologies require good network coverage or dedicated spectrum, which is not always available.

On the software side, object analysis and detection remain a challenge for AVs in certain scenarios, such as when it’s dark or the road surface is unusual, like gravel or cobblestone. Decision-making is another challenge to overcome. Currently, most companies take a hybrid approach using neural networks and rule-based programming to mimic human decision-making.18 With rule-based decision-making engineers require significant time and effort to account for every possible scenario, while just using neural networks can make it difficult to backtrack the root causes of certain decisions.19 Using a hybrid approach can resolve some of these issues.

AV safety and operational testing of all this technology is critical. To demonstrate human-like performance that makes them fit for the road, AVs would need to drive about 275 million miles.20 And to drive 275 million miles to collect the required data, it would take 100 AVs driving 24 hours a day, 365 days a year, at an average speed of 25 miles per hour for more than 10 years.21,22 However, testing times can be reduced by combining real-world tests with “model-in-the-loop simulations.” These simulations consist of running vehicles through algorithms that cover every possible scenario to ensure that the AV system can make the right decisions.23

In recent years, some of the biggest carmakers also recognized that widespread collaboration is needed to make full autonomy a reality. Numerous partnerships have been formed, and merger and acquisition activity has increased. Companies are also starting to specialize in specific areas of the AV industry, such as AI safety technology, rather than attempting to cover the whole value chain.

For example, in January 2022, Toyota announced that it plans to launch its own autonomous driving operating system by 2025, which followed similar announcements by Volkswagen and Daimler for 2024.26 Toyota may offer the operating system to other autonomous vehicle manufacturers. The announcement followed Toyota’s acquisition of Renovo Motors through its subsidiary Woven Planet Holdings in September 2021.

The charts below show the most active participants in the AV industry. The chart on the left highlights the companies with the largest AV segments by number of jobs. Nvidia leads with 23% of its workforce, followed by GM with 21% and Continental AG with 12%.27 The chart on the right highlights the top 10 companies by number of patents filed, which can indicate future growth and innovation, even if they never materialize. By share, Toyota leads with 20%, followed by Ford with 19% and GM, the only company to appear in both charts, with 17%.28 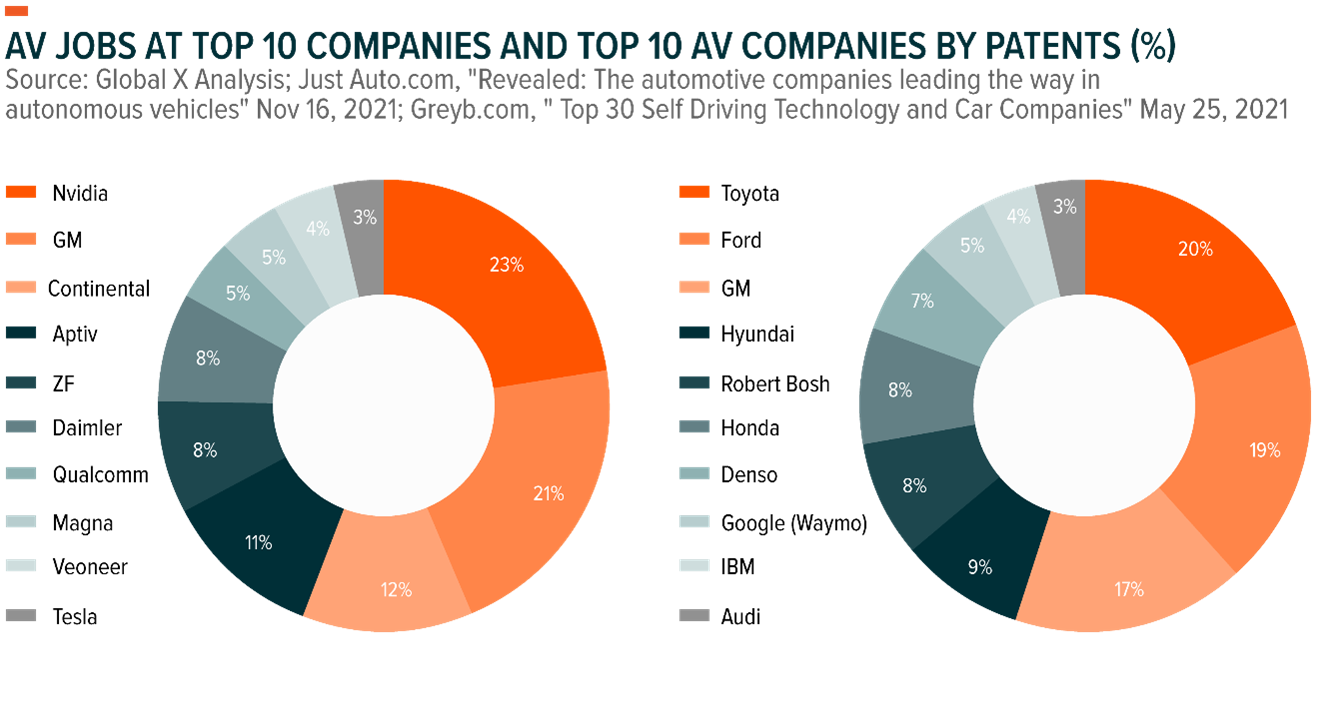 A high proportion of AV-related company filing mentions to AV jobs can indicate noise, such as attempting to draw investor or consumer interest while having no or few ongoing AV projects. The exception is when the company announces a large investment in its AVs segment, which is the case with Ford and its $29 billion investment in EVs and AVs.29 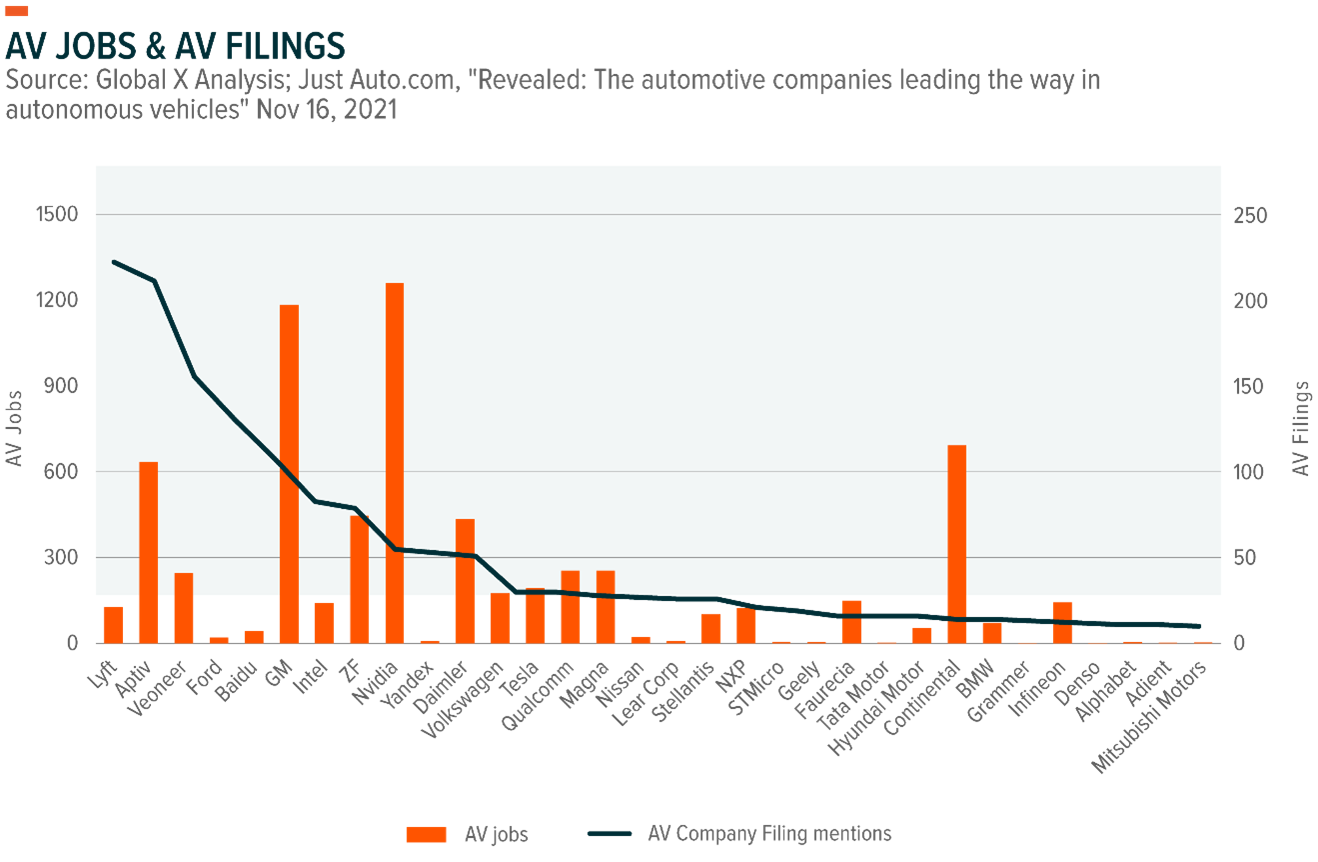 Regulations Among the Uncertainties on the Road to Widespread AV Adoption

As for many other segments, COVID-19-induced supply chain disruptions, labour shortages, and lower sales volumes caused companies to reschedule AV projects and product launches. These shorter-term headwinds joined longer-term issues that must be addressed to gain consumer acceptance, such as regulatory uncertainty and the need for high-quality road and radio tower infrastructure.

Most governments around the world acknowledge that legislation lags the AV technology curve. In February 2022, the U.S. Congress held a hearing on AVs for the first time in nearly two years.30 No comprehensive legislation has been introduced at the time of this report, but several consultations were held and official recommendations made.31,32 As of this writing, some of the main recommendations focus on premarket AV testing to ensure safety, as well as an exemption process for AV systems that may not need components such as steering wheels or brake pedals.33

The challenge for the United States and governments worldwide is to implement regulation schemes that don’t impede growth and innovation. According to the most recent KPMG Autonomous Vehicles Readiness Index, which assesses AV preparedness of 30 countries, Finland, the United Kingdom, and the Netherlands have a healthy balance between regulation and innovation. Other countries, like Israel, which boasts the highest technology and innovation score, lag on regulation.34 Singapore has the highest policy and legislation score, but it may be running the risk of stifling innovation. 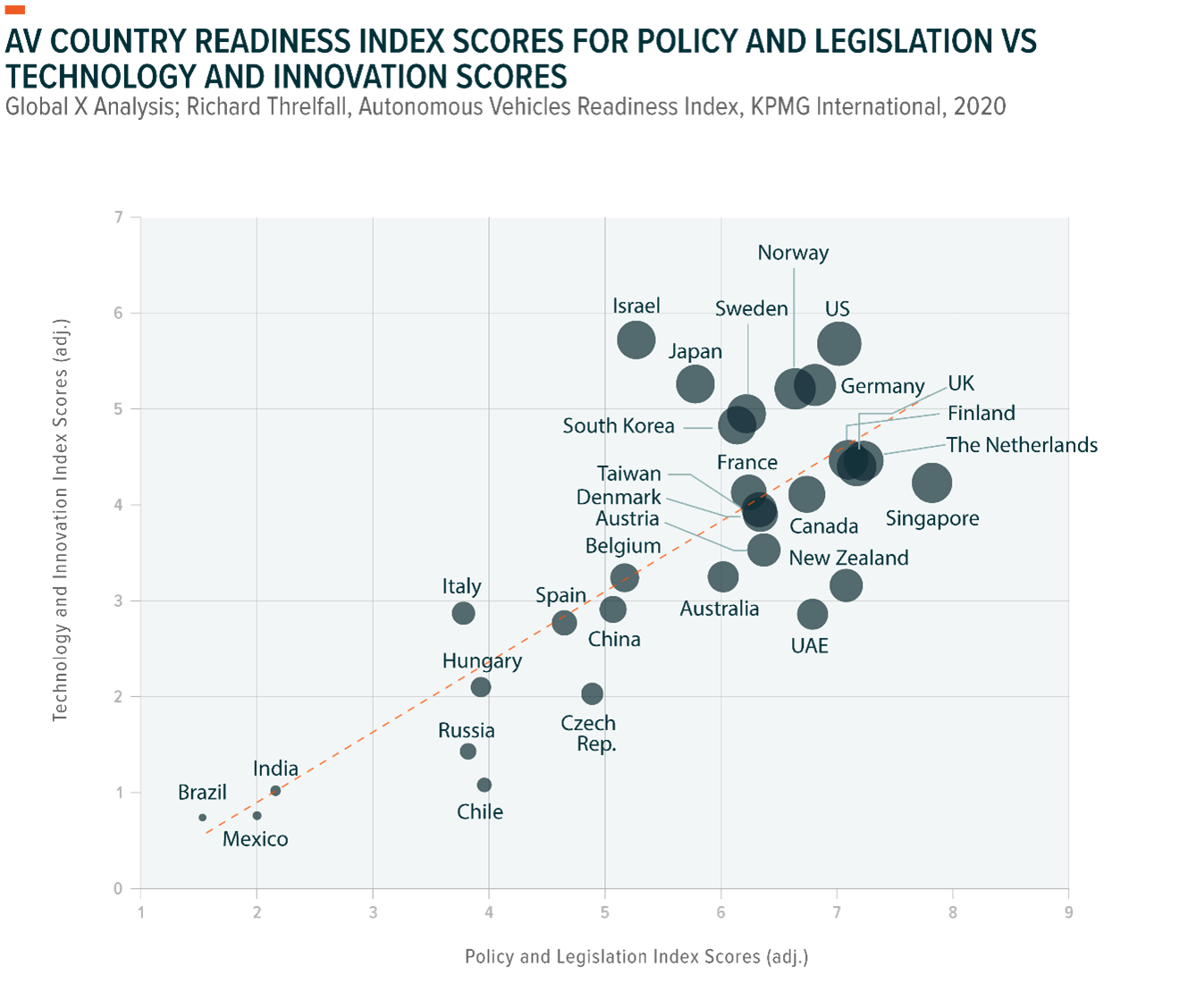 The United States leans more towards the innovation side. Federal regulations have yet to formalize, but individual states have a certain degree of autonomy to decide how to regulate AVs. Based on available data from 32 states, 56% permit AVs on public roads, and 31% do not require an operator to be present in the vehicle.35

To operate effectively, AVs require high-quality roads, clear signage, and thorough network coverage for V2X communication.36 As mapping, AI, and image recognition technologies improve, these requirements will become less strict. Scores for the Policy and Legislation vs Infrastructure Indices differ widely.37 Countries in the top right corner of the graph below scored highest in terms of AV infrastructure and regulation readiness, led by the Netherlands and Singapore. The United Sates scored highly on road quality, though only 59% of its roads are considered good.38.39 Israel scored poorly on AV infrastructure and regulation, despite scoring the highest on technology and innovation. With budgets stretched, there is also the question of how governments will pay for these sizeable infrastructure investments.40 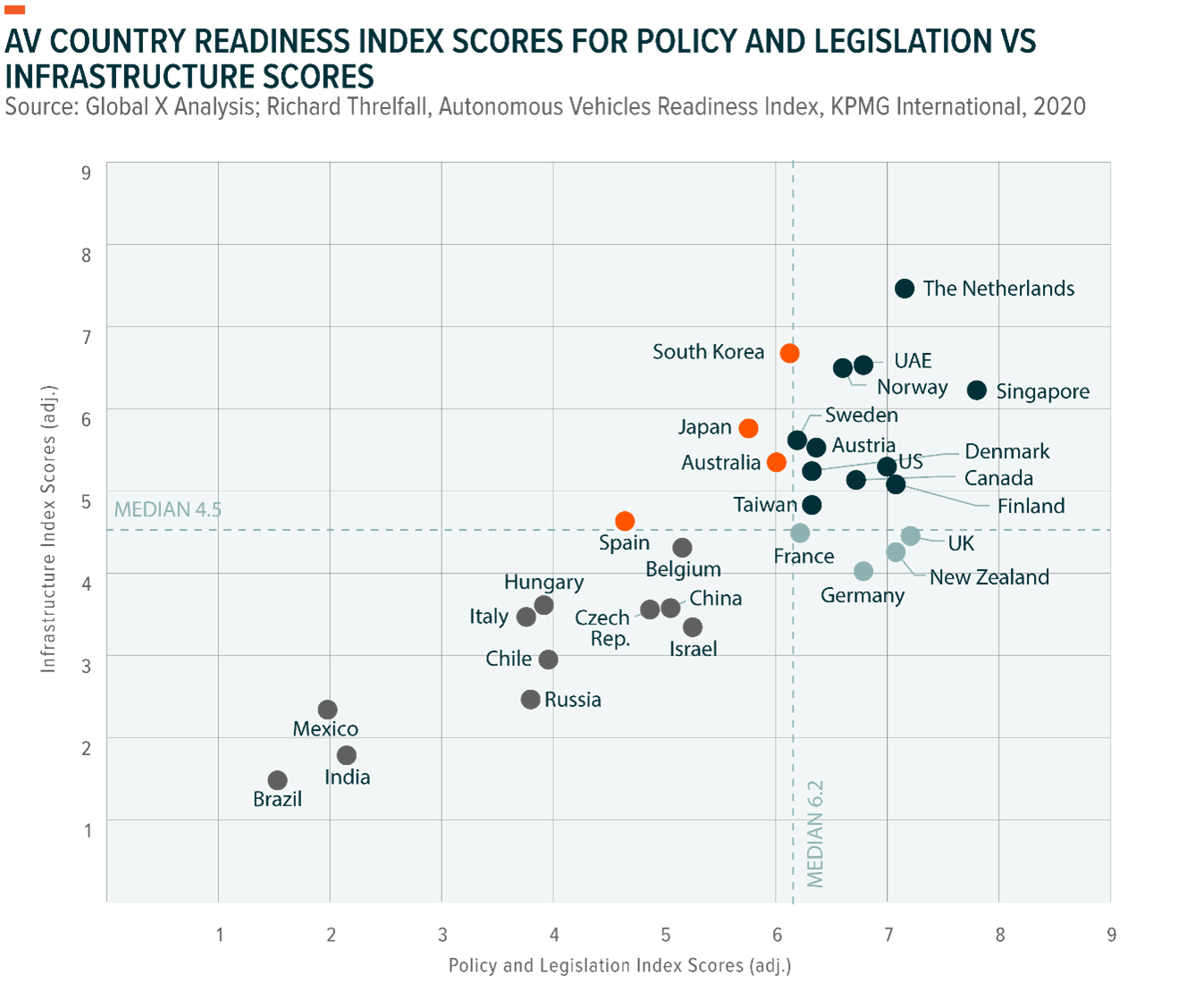 Another challenge for the AV industry’s growth trajectory is that consumers may still be a long way from being ready to embrace self-driving cars, as it is a rather significant adjustment. For example, airplanes are the safest mode of transport. However, a major reason why many people fear flying is due to the lack of control they have in the outcome. A similar type of fear may be observed with fully autonomous cars. Eventually, we expect most people will get used to it and come to prefer the array of AV comforts.

Currently, consumer acceptance of AVs varies across countries and regions. Generally, there’s a high correlation between AV regulation and consumer acceptance, as is the case in the United States and Finland, for example. On the other hand, Japan and Austria have fairly low consumer acceptance scores relative to their performance in other areas, such as regulation, infrastructure, and innovation. 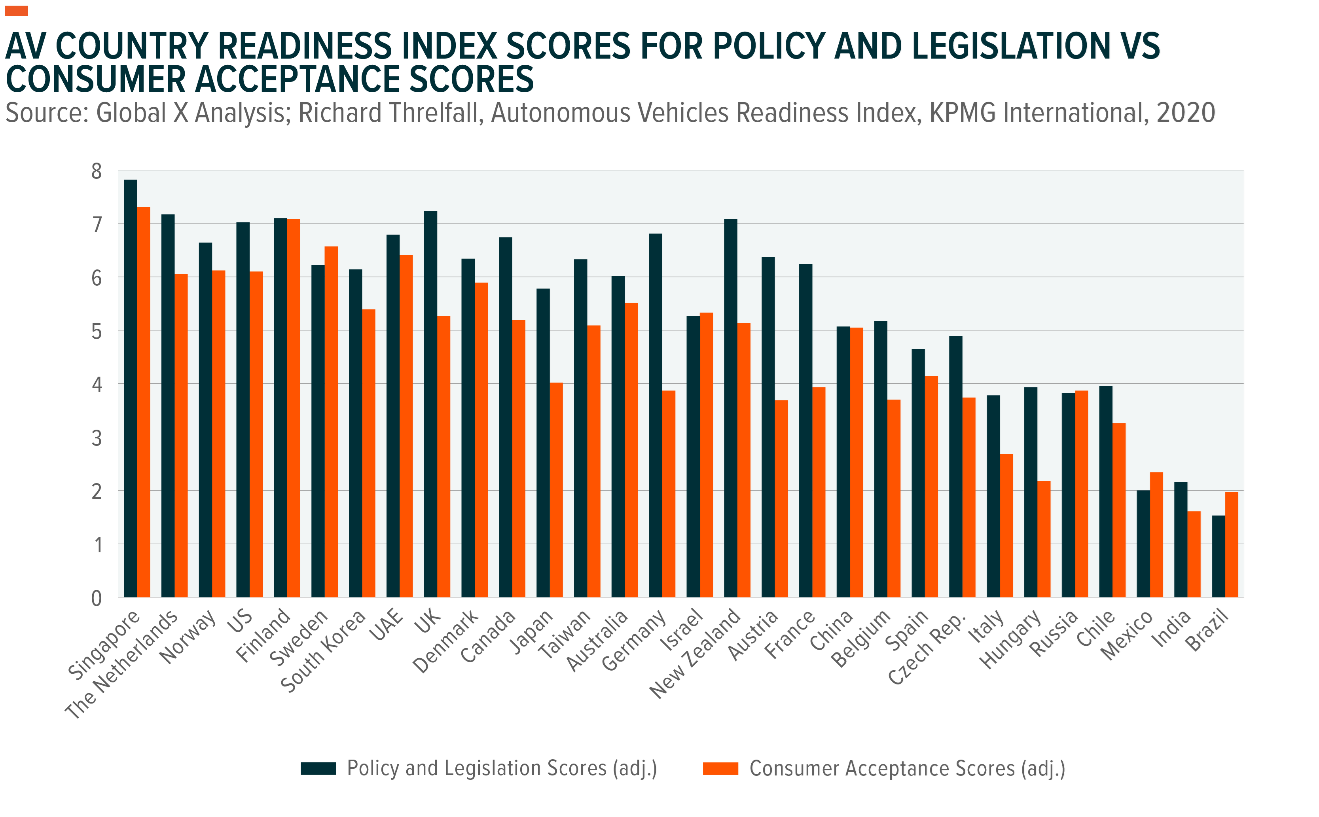 With OEMs and companies along the AV supply chain investing in and advancing self-driving technology, we expect AVs will continue to become safer and road ready. Mass adoption will take time, but for investors interested in exposure, early commercial use cases like robotaxis are already emerging. Waymo and Baidu launched robotaxis in confined areas and on designated roads, while GM’s Cruise has a launch planned for later this year and Hyundai next.41,42,43 Robotaxi adoption could limit adoption of high-cost personal AVs initially. But AV companies have solutions, including various revenue-sharing models and AV ride-sharing services.44

AVs have the potential to revolutionize public transportation by reducing traffic congestion, the need for parking, and overall travel costs for consumers and companies alike. They can also be deployed in-house. According to Nvidia’s CEO, 2022 will be a big year for Nvidia’s AV technology making short-distance deliveries in factories and warehouses.45 In our view, the companies that have the technology and economies of scale in place will likely be well-positioned as AV technology proliferates, having secured market share and future revenue streams. Upcoming regulatory changes, especially in the United States and Europe, could also help propel the opportunity. UPDATE: As of the moment of writing this, the U.S. National Highway Traffic Safety Administration (NHTSA) has just issued new rules for eliminating the requirement for driverless vehicles to include manual controls, such as steering wheel or pedals.46 This is an important development, and we believe it is the first of a series of new AV regulations to come.