Access to clean water is becoming a dire global challenge – one that may require rethinking all aspects of the water value chain with a greater focus on sustainability and making significant investments in water infrastructure and related products and services.

Water fuels life on earth and is a fundamental input for economic productivity. While it is seemingly abundant, competing uses and structural challenges presented by population growth, pollution, and climate change are stretching water resources precariously thin. Clean water – the water we drink, prepare our food with, and use for sanitation – faces the most immediate pressure with the direst societal and economic impacts. Over 2.3B people live in water-stressed countries and in 2019, unsafe drinking water resulted in more deaths than diabetes, malaria, or HIV/AIDs.1,2,3

Sub-optimal water management practices, alongside neglected water infrastructure development and maintenance, is much to blame for our current predicament. Fortunately, a shift to a more sustainable model is possible, led by government policy, technological innovation, and growing consumer and public health advocacy. Keys to this transition include:

In the following piece, we delve into the current challenges in the water value chain, explore how modernized water management and infrastructure will be critical to turning the tide on this crisis, and discuss how AQWA provides exposure to this critical theme.

Sustainability Starts at The Source

Boundless oceans and towering glaciers deceive many into believing that we have a limitless supply of water to draw from. But in fact, only 0.3% of all water on earth is useable.4 And to get that useable water into our homes, farms, and businesses, it must follow a multi-faceted cycle, which touches a variety of companies and services. 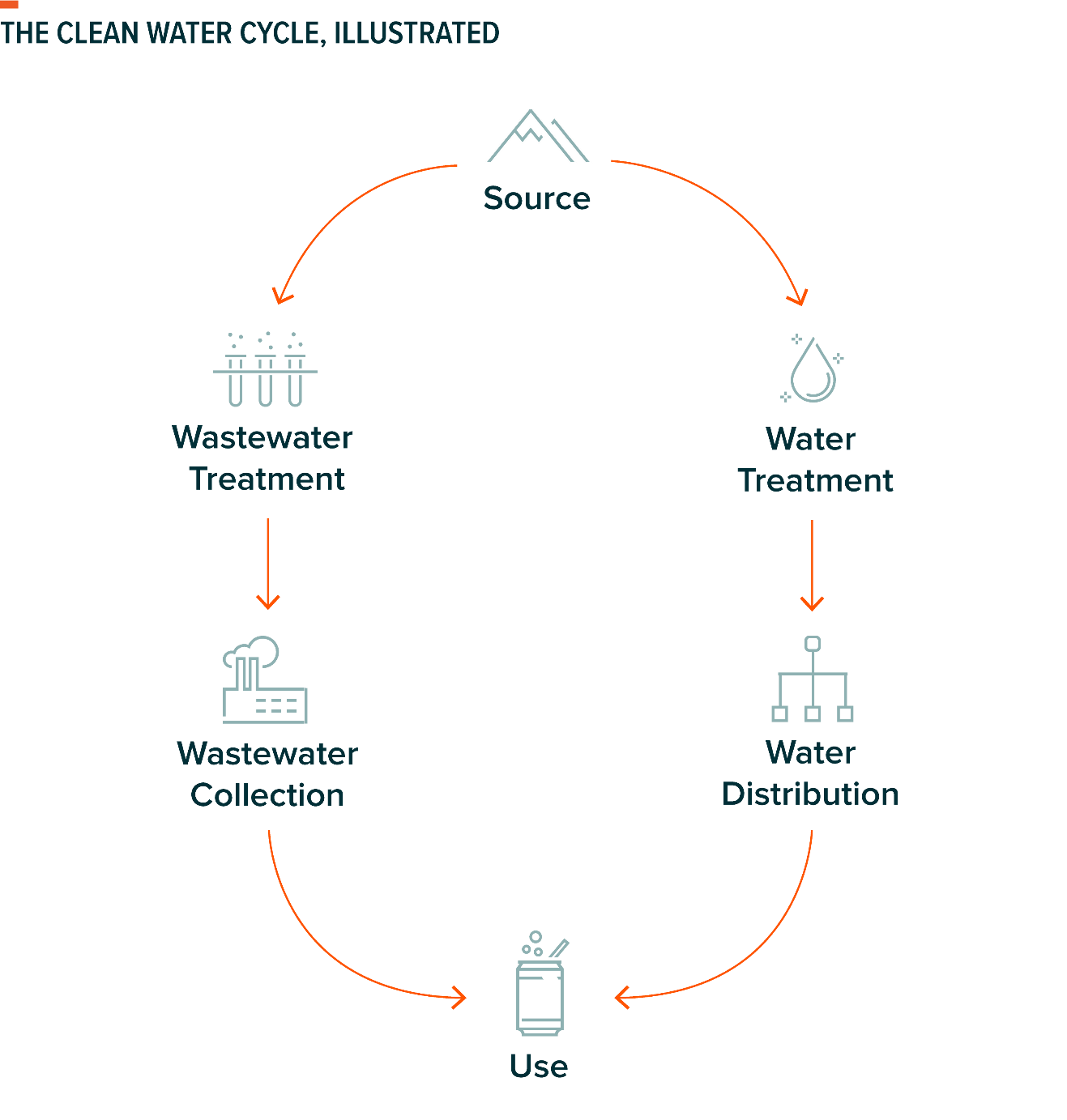 Nearly all water used by humans comes from freshwater sources that are replenished by precipitation (rain, snow, hail) and are typically classified as either surface water or groundwater. Surface water comes from lakes, reservoirs, ponds, rivers, streams, and other low-saline bodies of water and is extracted (abstracted) using motorized pumps, infiltration galleries (drains), and/or diversion structures that direct flowing water to a collection site. Groundwater, on the other hand, exists under the Earth’s surface in aquifers, which are permeable rock formations that can be drilled into and pumped for water.

For centuries, humans drew freshwater from surface and groundwater sources with minimal concerns for sustainability. Populations were many times smaller and technological limitations prevented unsustainable levels of extraction. Precipitation could replenish these sources much faster than they were used.

Making matters worse, freshwater supply could be threatened by climate change. Rising global temperatures accelerate extreme weather events like heatwaves that cause drought conditions, and powerful storms that can damage water infrastructure or overwhelm sewage operations, contaminating the water supply. A NASA study predicts that a mega-drought, one lasting more than three decades, is increasingly likely to hit the US Southwest and Central Plains regions. On our current greenhouse gas emissions trajectory, the odds of a mega-drought are as high as 80% by the later half of this century.7

So, what is the solution? First and foremost, finding new sources of freshwater is paramount. Desalination of abundant seawater presents one potential option, particularly for coastal regions. For many years, desalination was too expensive to be viable and there was limited supportive infrastructure. But in the past three decades, the cost of desalination fell 50%, while the volume of freshwater produced by the process rose by 320%.8,9 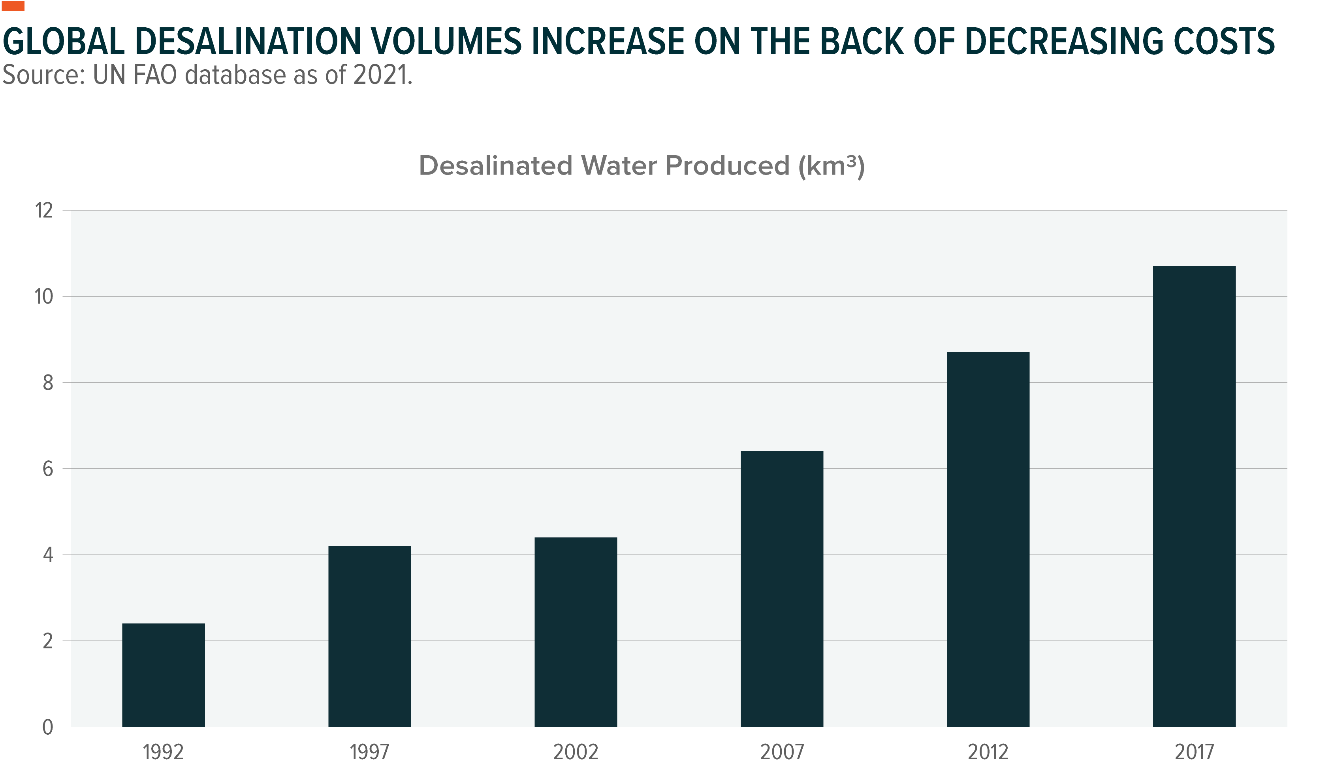 Seawater makes up 97.2% of all water on earth and continued cost improvements to reverse osmosis desalination technology could turn the tides in the global fight against water scarcity.10 Other potential freshwater sources include rainwater and fog harvesting, though neither have yet to see widespread adoption.

Next, enhancements must be made to existing water extraction approaches and operations. Disruptive tech-based solutions like connected sensors and artificial intelligence can monitor aquifers and surface sources in real time. Supervisory, control, and data acquisition (SCADA) systems, for example, measure water levels, monitor wells for infiltrations, and automate pumping.11 Implementing these types of technologies can help mitigate irreparable damage to global water resources.

Over a decade ago, the United Nations General Assembly recognized access to clean water and sanitation as a human right. Despite this proclamation, water-related disease continues to be a leading cause of illness and in 2019 likely contributed to an alarming 2.7% of all global deaths.12

Water treatment is the process of bringing raw freshwater up to safe standards for its end-use, which in most cases is drinking water. Conventional treatment for drinking water is as follows:

Coagulation/Flocculation: Chemicals with positive charges like aluminum sulphate and ferric sulphate are added to the water, forcing small suspended and dissolved particles to bind, or coagulate, into larger particles called flocs.

Once treated, water needs to be distributed safely and efficiently to its end-users. In populated areas of advanced economies, treated water is often pumped into an elevated tank, which then provides pressurized water across an underground pipe network. Yet in many cases, this infrastructure has been neglected, resulting in wasteful and dangerous practices. In the United States, an estimated $7.6B of treated drinking water was lost in 2019 due to leaky pipes – a figure that could double to $16.7B by 2039 without substantial investment.15 And worse, 6-10 million people in the US still receive their drinking water through lead pipes and service lines, which is poisonous and can cause developmental issues in children and reduced cardiovascular and kidney functions in adults. These shortcomings resulted in a C- grade for the US’s drinking water infrastructure from the American Society of Civil Engineers and is a leading reason for President Biden including $111B in proposed funding for water systems in his American Jobs Plan.16 Beyond the borders of the US, many other developed nations face similar treatment and distribution issues, but the situation is often even more dire in developing markets, where water distribution can be much less safe or efficient, or even non-existent.

Technological advancements in water treatment tend to focus on improved methods for removing contaminates – either doing so more efficiently or relying less on chemicals additives. Such technologies include membrane filtration, ultraviolet irradiation, and nanoparticle purification.17 The latest in water distribution technologies allow for real time monitoring of quality and usage rates, AI-based forecasting of future demand trends, and dynamic adjustments to water networks to meet these needs. Ultimately, upgrading water treatment and improving distribution via the latest technologies could result in much more efficient, safe, and resilient water systems.

From 2002 to 2017, the global population increased 21% to 7.6B people and municipal and agricultural water withdrawals increased by 12%.18 Water demand increasing at a slower rate than population growth is ostensibly a sign of greater water usage efficiency, but overall population growth continues to pressure systems worldwide. 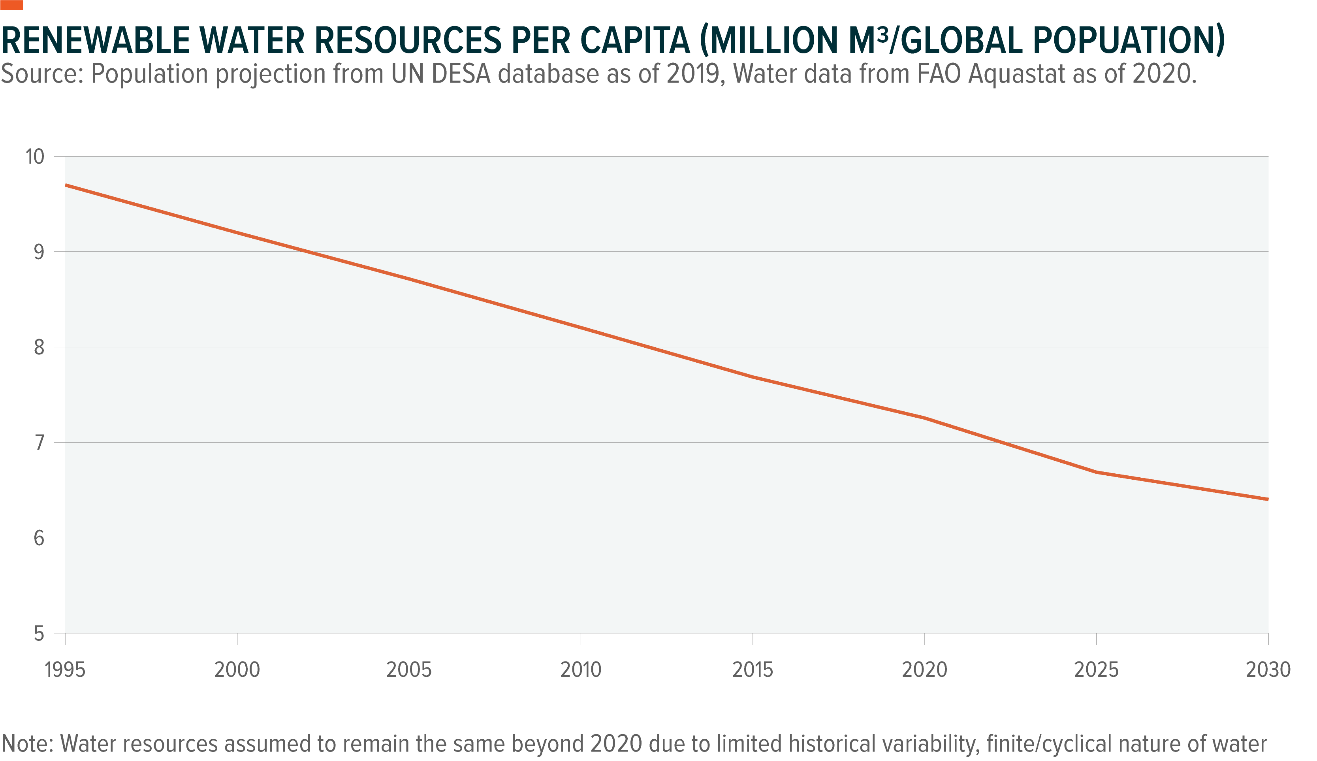 Globally, 71% of freshwater is used for agricultural purposes, whereas roughly 17% is used by industry, and 12% for households.19 Growing populations alongside a quickly rising middle class in emerging markets are resulting in rising demand for water-intensive agricultural products like crops, meat, and dairy. It is expected that by 2050, total water usage will increase 15% above today’s levels to serve approximately 9 billion people around the world.20

Fortunately, water usage can continue to become more efficient per capita to alleviate the pressures of population and economic growth. At a local level, implementing water preservation-focused policies, like banning lawn watering during mid-day when evaporation is at its peak, establishing building codes that require low-flow toilets, faucets, and showerheads, and dynamic and tiered pricing, can all help reduce consumption patterns. In addition, the further adoption of cutting-edge technologies in agriculture like precision irrigation, indoor farming, and crop modification can further reduce water usage, while maintaining similar levels of food production.

The world is a closed system – every drop of water used to shower in the morning, grow a stalk of corn, or cool a data center ultimately finds its way back to the ecosystem. Much is evaporated in the atmosphere and through precipitation returns to the earth, but stormwater, domestic sewage, and industrial wastewater accumulate in vast quantities that require infrastructure and treatment processes to safely manage.

Municipal wastewater is typically collected through combined sewer systems which merge stormwater and domestic sewage through underground pipes. This water is then brought to a treatment plant which conduct two stages of treatment:

Agricultural and industrial wastewater treatment processes differ from this and are often more challenging as they must safely remove chemicals and other inorganic pollutants. As suspected, this process of collecting and treating wastewater is costly – at least in a vacuum where public health and environmental damage is not being factored in – and therefore is often unavailable in poorer regions. Globally, it is expected that 80% wastewater returns to the ecosystem without receiving any treatment, endangering approximately 1.8 billion people who risk contracting cholera, dysentery, typhoid and polio by drawing water from these polluted systems.22

For many areas, the answer to these challenges is simply more funding to build adequate sewage and wastewater treatment facilities. For existing infrastructure, however, there are still several improvements that should be implemented, including increased capacity and resilience to handle powerful storms that often overwhelm systems, retrofitting facilities for greater electric efficiency (which can reduce operating costs and capture geothermal energy), replacing chlorine treatments with ultraviolet disinfection techniques, and integrating greater automation and software in daily operations.

8. Yale, “As Water Scarcity Increases, Desalination Plants Are on the Rise,” Jun 2019.