The Case for Disruptive Materials

The world is rapidly embracing digital and clean technologies like electric vehicles (EVs), hydrogen fuel cells, wind turbines, robotics’ traction motors, and solar photovoltaic (PV) panels, just to name a few. These technologies can help slow climate change, improve productivity, or connect millions of people around the world. But behind these complex technologies are many essential inputs like metals, minerals, and materials. Without them, these technologies would not exist—at least in their current forms.

Rare earth materials, such as nickel, lithium, copper, graphene and graphite, cobalt, manganese, palladium and platinum, zinc, as well as carbon fibre are a few examples of the critical but often unheralded basic ingredients fuelling the advancement of disruptive technologies. But because their extraction is a physical process and has natural limitations, supply chains for disruptive materials can face challenges that are uncommon in high tech industries. Supply can be limited or delayed, capital requirements are high, and geographic features and local regulations can limit availability.

In this piece, we explore how the emergence of several advanced technologies is expected to create explosive demand for disruptive materials. 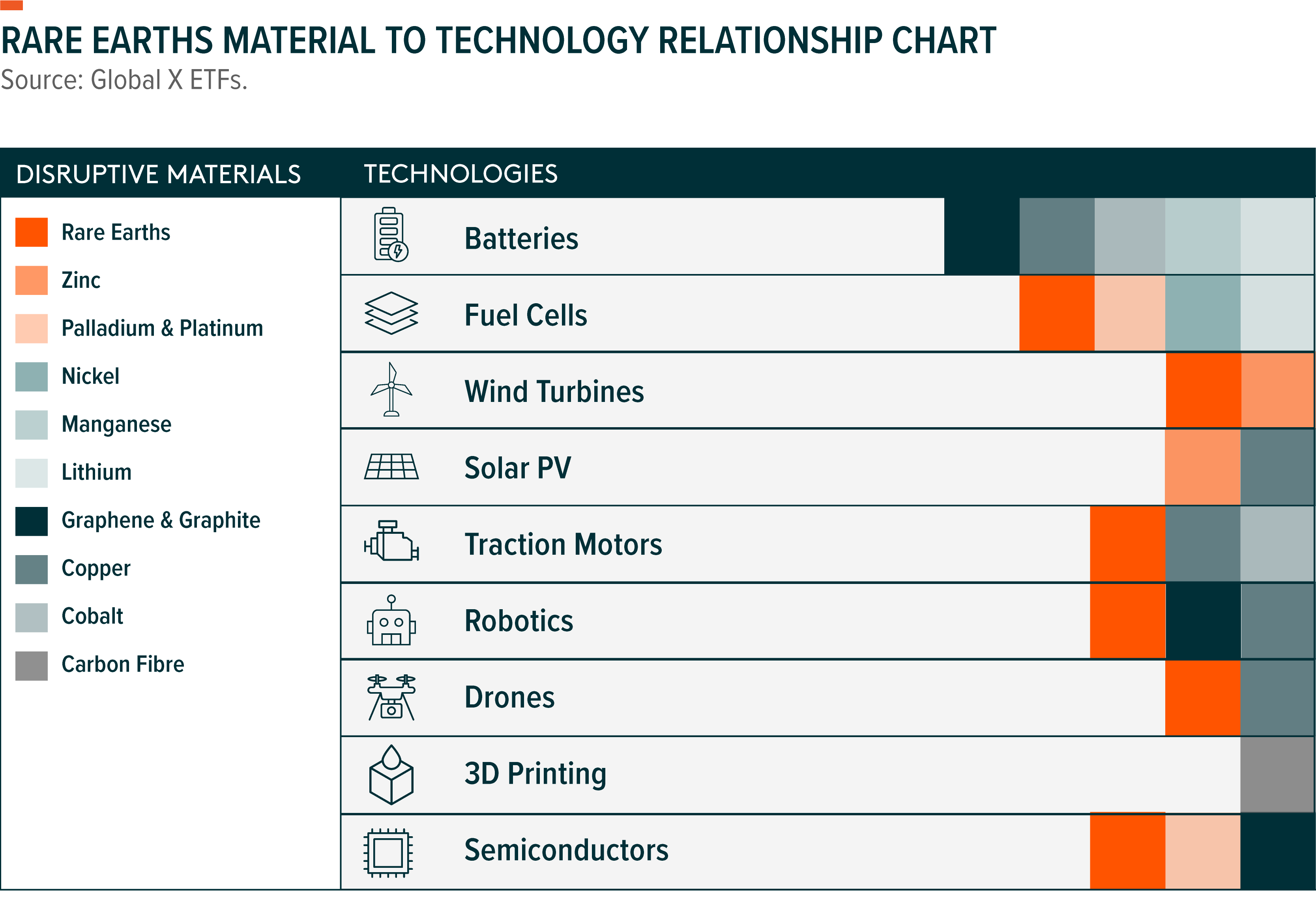 Disruptive Materials Could Enter a Supercycle

Materials prices tend to be highly correlated with global macroeconomic conditions. Most cycles, or the fluctuations in the supply and demand for materials, tend to be shorter-term in nature, lasting anywhere from months to just a few years as economic conditions evolve, and supply and demand rebalances. But supercyles are different. They are characterized by structural, decades-long periods of above-trend price movements. Historically, rapidly growing demand combined with persistent and insufficient supply create the conditions for supercycles. For example, the rapid industrialization of the BRIC countries (Brazil, Russia, India, and China) from the mid-1990s, created a commodities supercycle that lasted 20+ years.2

In our view, the simultaneous emergence of several game-changing technologies could create a similar condition for a supercycle in specific materials. For example, the transition from internal combustion engine (ICE) vehicles to EVs is poised to be a significant driver of demand for materials like lithium, graphite, copper, nickel, cobalt, and manganese. An EV requires six times more of these materials than a traditional  ICE.3

Other clean technologies such as wind turbines and electric motors require rare earth minerals to manufacture permanent magnets such as neodymium, praseodymium, terbium and dysprosium.4 Global production of rare earth materials reached an estimated 280,000 tons in 2021, compared to 240,000 in 2020 and 220,000 in 2019.5 China accounted for 60% of total production in 2021, followed by the U.S., at 15%.6

Copper continues to gain importance because of its properties that make it a reliable conductor of electricity and heat and resistant to corrosion. Solar power generation requires about 5 kg of copper per kilowatt, roughly twice that of conventional power generation.7 Given that copper is much cheaper than precious metals with similar electrical conductivity, it is frequently the metal of choice for the generation, transmission, and distribution of electricity. It is also a key component of renewable energy systems and data transmission in the telecommunications industry, including internet services and cable wiring.

Graphene’s use in end-markets like automotive & transportation, aerospace, electronics, and construction is expected to grow too. Often described as a wonder material, graphene is the thinnest known material but also the strongest, being 100 times stronger than the strongest steel.8 Graphene has a myriad of use cases, including in quantum computing, sensors, transistors, and other electronic components.

Carbon fibre provides greater strength, stiffness, heat resistance, and durability than other 3D printed materials such as thermoplastics.9 Today, approximately 30% of all carbon fibre is used in the aerospace industry because of its extraordinary strength-to-weight ratio.10

Platinum has become a vital material for the electronics industry, especially hard disks. Platinum is also foundational for hydrogen fuel cells, as it is used as the catalyst that separates hydrogen into protons and electrons, which then generate an electrical current.11 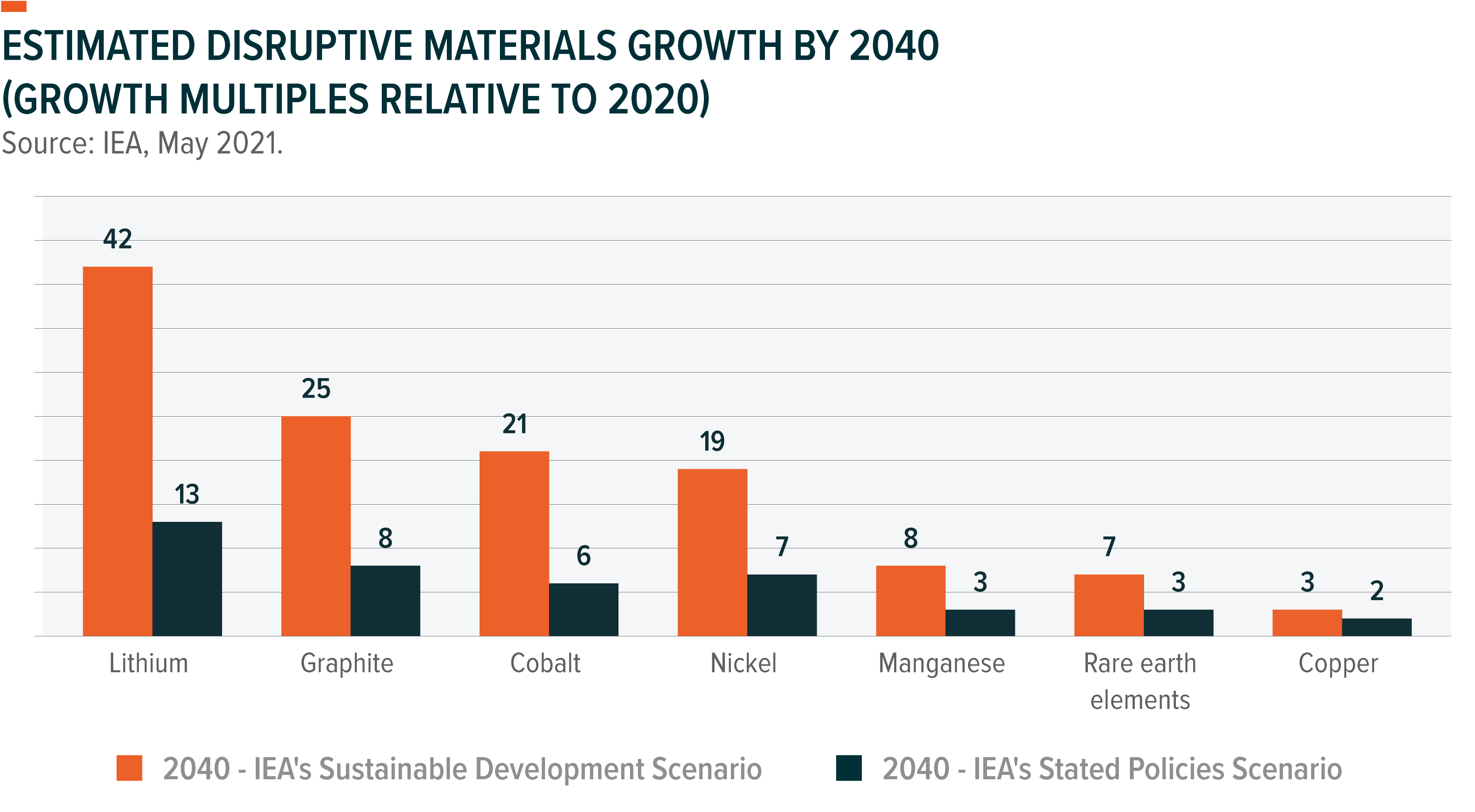 As noted in several of the examples above, many of the key demand drivers for disruptive materials are related to climate change and clean technologies. Renewable energy sources are continuing to gain on fossil fuel-based sources as they become more affordable. We expect to see continued adoption, driven by electrification, economies of scale, and climate action. The International Energy Agency’s (IEA) climate change scenarios provide glimpses into potential demand for disruptive materials.

Quantifying the Opportunity: Fossil Fuels Out, Disruptive Materials In

Today, the disruptive materials theme is in its early stages amid structurally changing demand drivers for certain raw components. Several companies across the Energy and Materials sectors are looking to enhance their exposure to the space by buying mines, land, processing capabilities, and established companies involved in disruptive materials.  BP, for example, one of the world’s largest oil & gas producers, has taken a keen interest in the subject. The company expects to become net zero by 2050 or sooner, leveraging renewables, biofuels, and hydrogen.

A traditional mining company like IGO Limited is in the process of divesting its gold mine interests and pursuing disruptive materials projects. Its $1.4 billion lithium joint venture with Tianqi Lithium, Tianqi Lithium Energy Australia (TLEA), is one such project.18 In May 2022, TLEA announced initial production of battery-grade lithium hydroxide from its refinery in western Australia.19

Another example is Lithium Americas, which has the largest known lithium resource in the U.S. that is set to begin early mining works in 2022. 20, 21 The company aims to be the first company to produce carbon neutral lithium products.

Other companies are ramping up capacity expansions, including copper miners. In May 2022, First Quantum Minerals approved a $1.25B expansion plan for its Kansanshi copper mine in Zambia. The project will increase copper production by an estimated 25%, with the mine set to run through 2044. 22 The company also announced plans to develop a new $100M nickel mining project.23 In addition, Antofagasta PLC is planning to increase annual copper production by an average of 60,000 tons per year over the next 15 years, starting in 2022. 24

In the same way, bringing additional supply of disruptive materials is hard, costly, and takes time. The combinations of these factors exacerbate the need to rapidly increase demand. For example, depending on the method of extraction, lithium extraction can require 3-5 years or more of studies, permitting, capital raising, and capital expenditure before any lithium is produced. Other disruptive materials such as cobalt are only found in specific regions. The Democratic Republic of Congo (DRC) is the largest source of cobalt, accounting for 70% of global production.25

As companies move further into disruptive materials, we expect revenue profiles to shift significantly. According to one estimate, revenue from disruptive materials revenue could increase five-fold by 2040, reaching over $250 billion, while mining coal revenues could decline by 59%.26 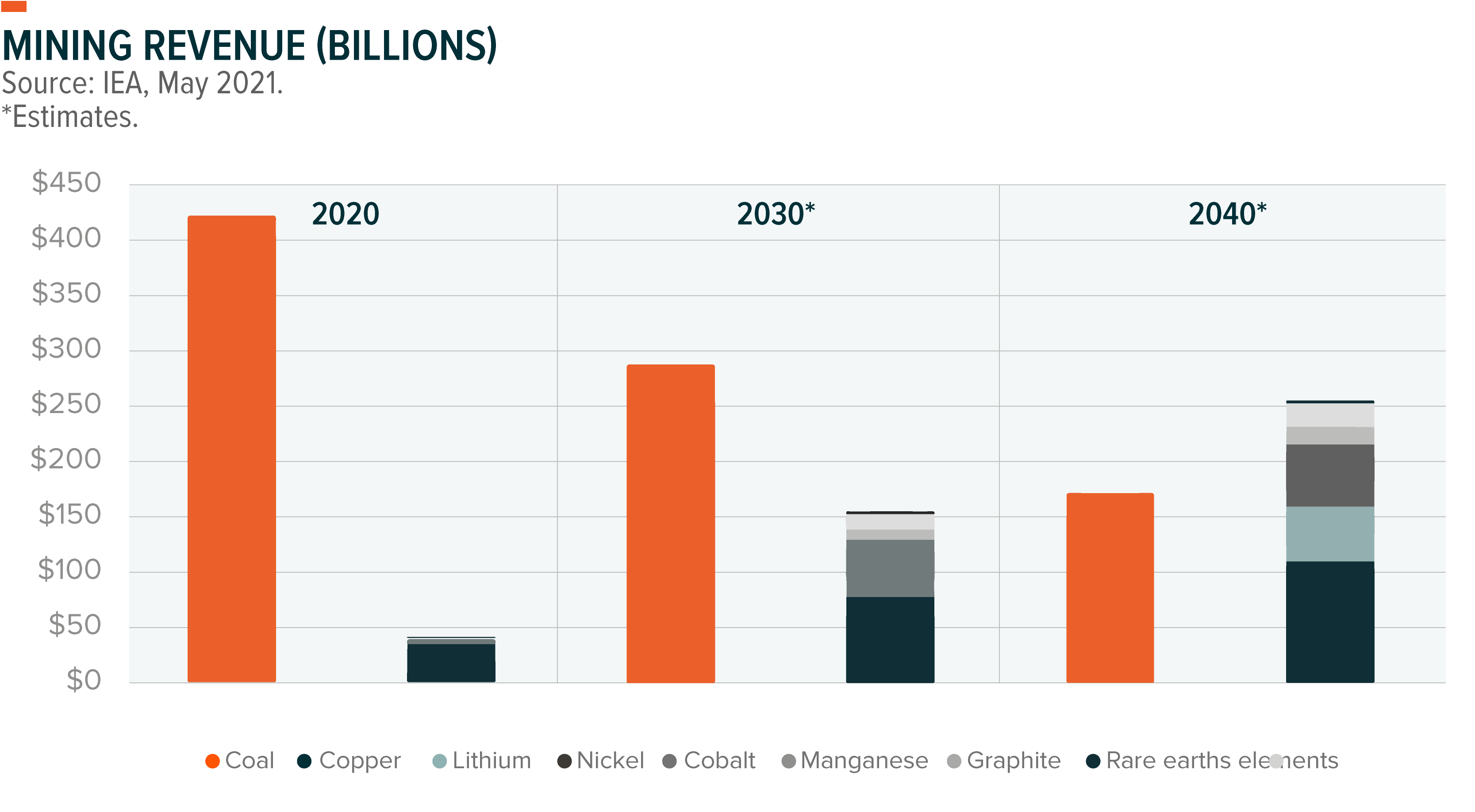 We believe the disruptive materials theme is an overlooked area in a decades-long shift towards digitalisation and clean energy. As technology continues to play an increasingly important role in all aspects of our lives, the fundamental ingredients for technology hardware are likely to become more and more critical. Given the physical limitations of mining, producing, and enhancing materials however, we believe demand could structurally outstrip supply, resulting in a targeted supercycle and rising prices. Investors with exposure to Clean Technology, Electric Vehicles, and/or Technology Hardware may be wise to consider upstream exposures to the disruptive materials-related activities as well in an effort to gain broader exposure to the ecosystem of companies that may benefit from the rise of several emerging technologies.