Data centre and cellular tower REITs form the backbone of the digital and wireless technologies that we use every day. And they are foundational to the proliferation of the next generation of technologies, like 5G networks, which require new and improved infrastructure. The COVID-19 pandemic accelerated the economy’s digital shift, as remote working increased the demand for network and data services, turning telecommunication services into one of the most essential industries. These factors are among the main drivers of the recent increase in Mergers and Acquisitions (M&A) activity within the sector.

In the current inflationary environment, real estate can be an attractive investment because the sector is generally better at passing price increases onto consumers compared to other non-cyclical sectors. Real estate investment trusts (REITs) can be particularly attractive because of their ability to distribute 90% of their taxable income to shareholders. Couple the economy’s digital shift with inflation, and we believe that data centre and cellular tower REITs have positive momentum.

Typically, REITs are seen as an inflation hedge, having outperformed the S&P 500 on average during moderate and high inflation periods in the past.2 While data centre leases are long-term in nature, they often include annual escalators that increase lease payments by a certain percentage, or they are linked to the Consumer Price Index (CPI). In addition, data centre REITs have low labour costs compared to other REITs, which can limit increases in total operating costs during periods of rising and persistent inflation.

REITs also have a history of outperforming equities when interest rates rise. The graph below compares the cumulative total return of REITs and stocks when the Federal Reserve tightens its monetary policy over a sustained period. Since 1976, REITs outperformed equities three out of six times during such periods. 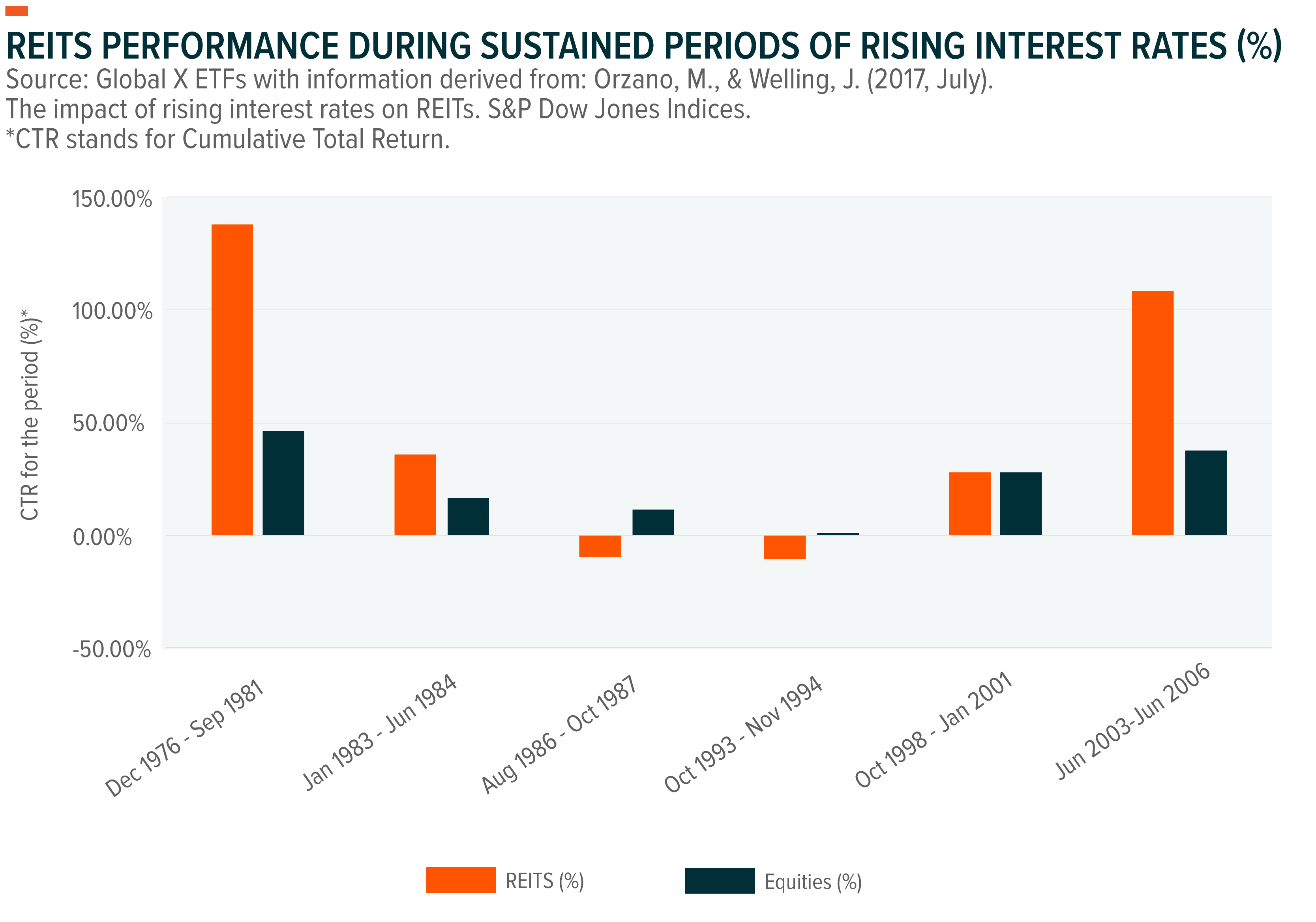 We believe that the inflation boost provides further momentum to data centre and cellular tower REITs’ longer-term structural tailwinds stemming from the increase in the use of data and connectivity services. Next-generation technologies, such as 5G, artificial intelligence (AI), and the Internet of Things (IoT) continue to proliferate, making digital infrastructure essential. With demand increasing, data centre REITs outperformed the S&P 500 in five out of the past seven years, with price return contributing 87% to total return on average.3 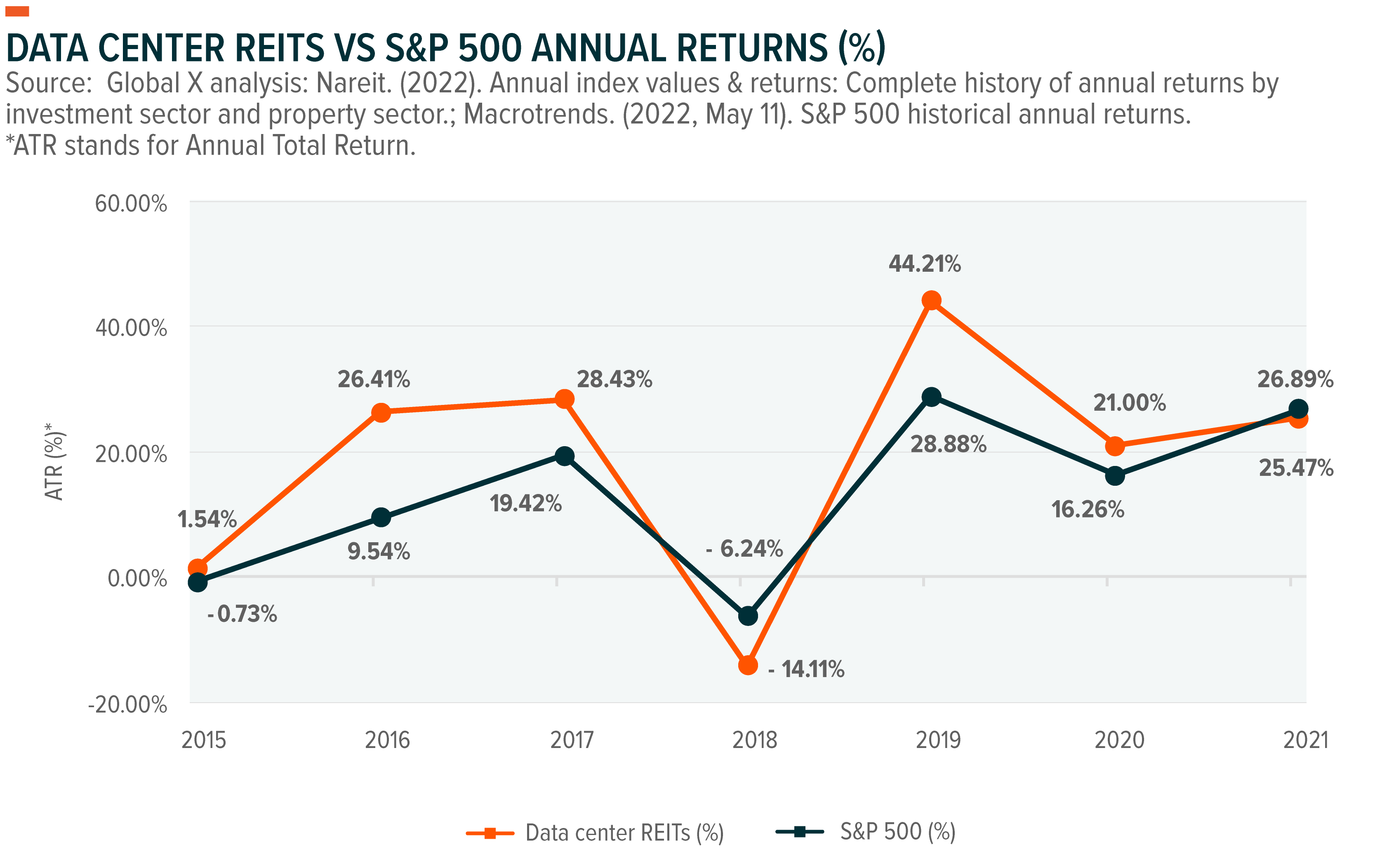 The impact of inflation on the broad data centre service market depends on factors such as lease length, location, loan-to-value ratio, and vacancy rates. High-demand, low-vacancy markets will likely result in rental rate increases due to the squeeze in supply caused by inventory bottlenecks.4 We expect pricing to increase as the pace of new construction slows due to power delivery constraints and as supply chain disruption and shortages delay deployments.

For example, Northern Virginia, the world’s largest data centre market, had one of the lowest vacancy rates at 1% in the second half of 2H 2021.5 In addition, Northern Virginia makes up the largest share of new construction in the United States, with nearly 600 megawatts (MW) under construction in 2H 2021, out of a total of 1.5 gigawatts (GW) in the country.6 Silicon Valley is second with a 17% share of new construction, or 254 MW, and a vacancy rate of 3%.7

In the Europe, Middle East, and Africa (EMEA) region, London accounted for more than half of new construction projects in 2H 2021 with 423 MW under construction. Its vacancy rate was 9%. Dublin followed with 201 MW under construction and a 2% vacancy rate.8 The Asia Pacific region shows of the largest increases in demand, with direct data centre investment turnover roughly doubling from 2020 to US$4.8 billion in 2021.9 As of 2H 2021, Hong Kong and Singapore had the highest volume of new construction projects in the region, with 202 MW and 191 MW, respectively.10 Singapore also had one of the lowest vacancy rates at 2%.11 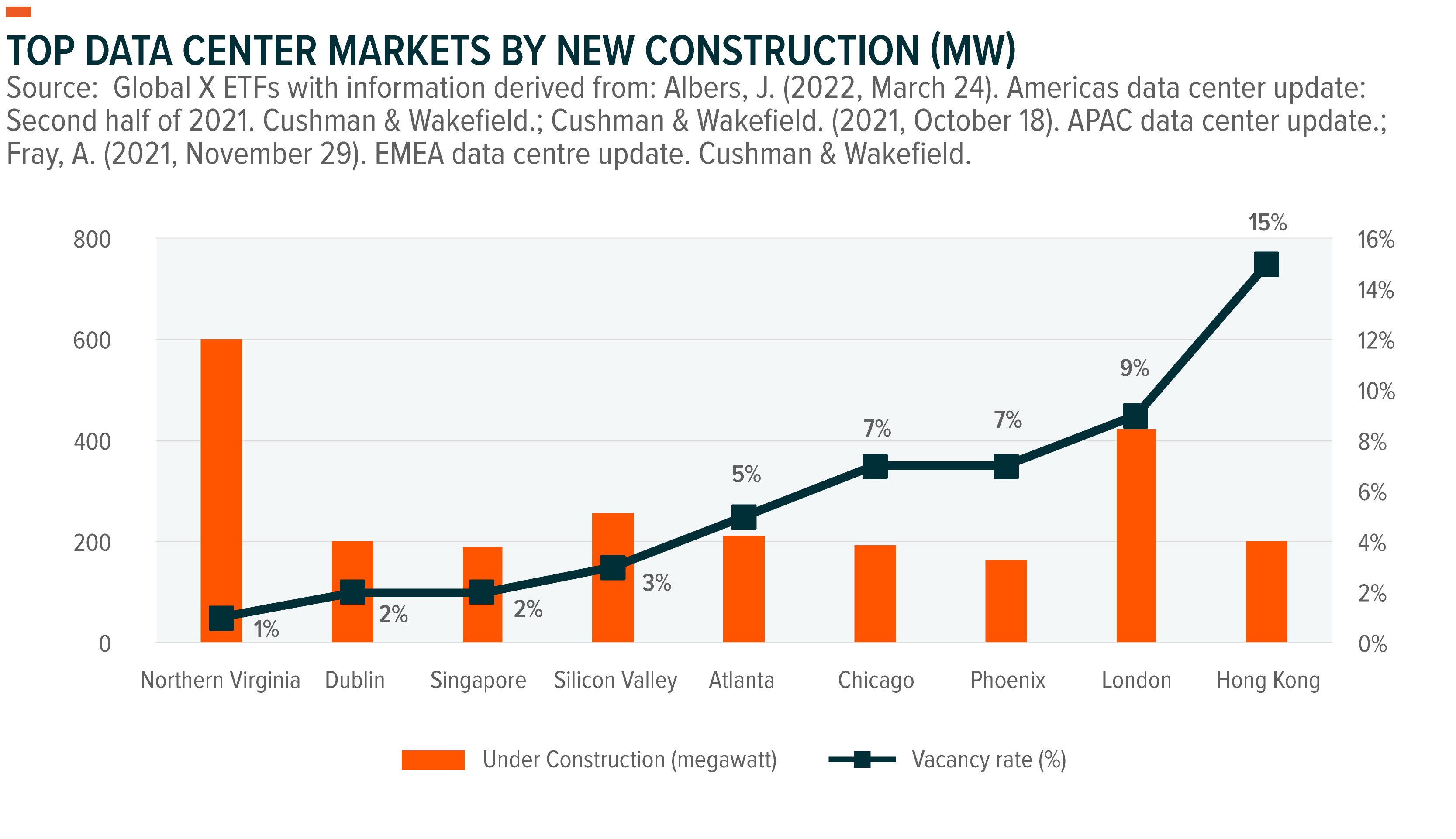 As one of the companies with the largest project pipelines in the United States, it is unsurprising that Digital Realty took the top spot in 2H 2021 with close to 1,117 MW under construction.12 But hyperscalers, such as Amazon and Facebook (Meta), are on the rise with 449 MW and 370 MW worth of projects under construction in 2H 2021, respectively.13 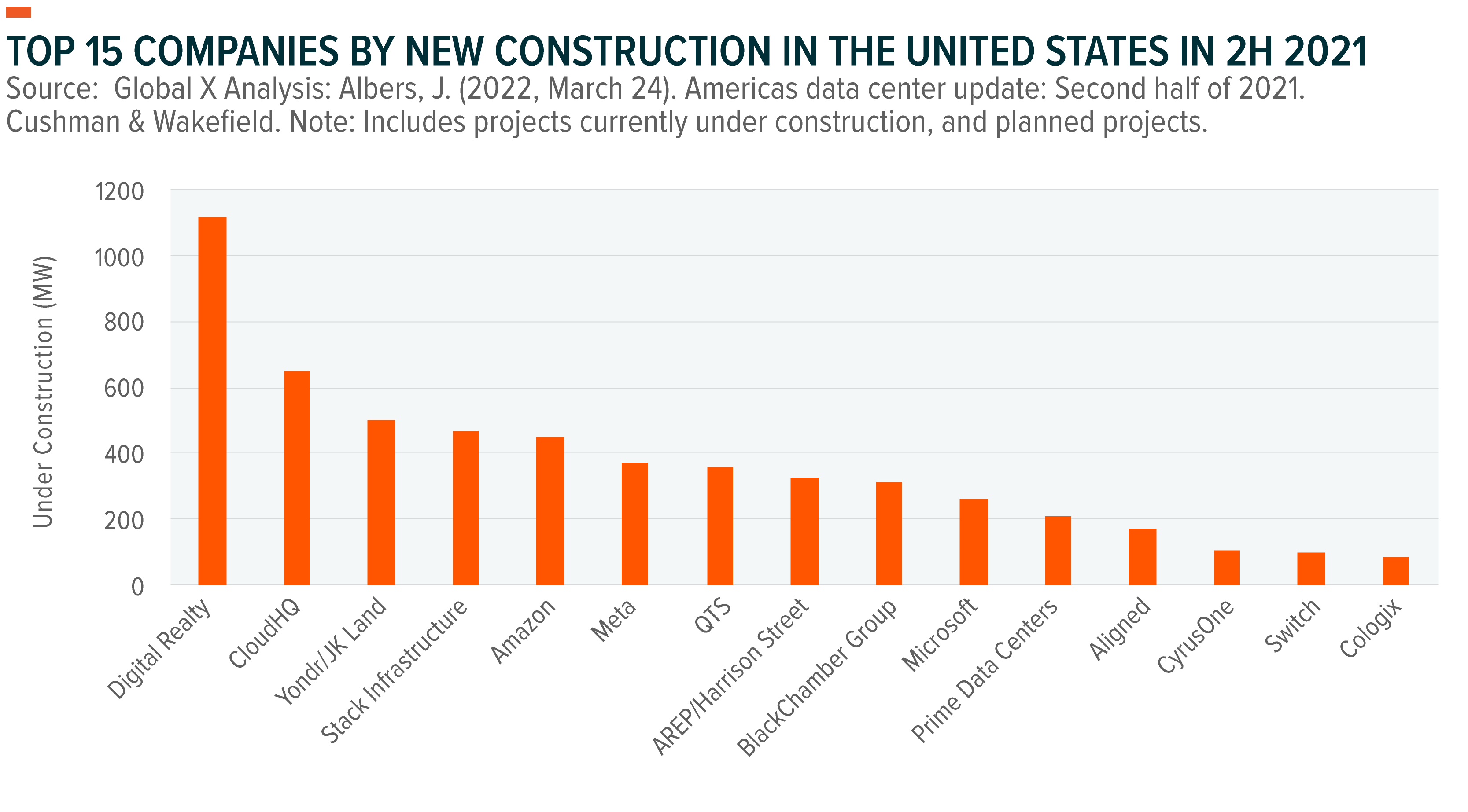 When assessing a data centre market’s growth potential, market size, fibre connectivity, and cloud availability are the three most important considerations, according to Cushman & Wakefield’s 2022 Global Data Center Market Comparison.14 Vacancy rates, development pipeline, sustainability, smart cities, incentives, and taxes form the next set of important considerations.15 Contrary to popular belief, power cost and land prices are some of the least important considerations.16 These factors help to explain why investors are attracted to relatively expensive markets such as London, Silicon Valley, and Singapore.

In terms of data growth, 5G and the IoT drive large increases in volume.18 For example, demand for mobile data increased 40% from 2016 to 2021.19 The number of connected IoT devices worldwide increased by about 9% in 2021 from 2020 to 12.3 billion active endpoints.20 That number is expected to more than double to over 27 billion as soon as 2025.21 Mobile edge computing is also expected to be a major driver of fibre demand, with investments in the space expected to reach US$76.5 billion in the United States in 2022.22

We expect future M&A activity in the data centre industry to be largely driven by the shrinking supply of available, high-quality data centre real estate, which will continue to push valuation multiples higher. Currently, valuation multiples on the data centre side are high at 20–25x EBITDA.23 M&A activity for cell towers is higher than data centres, with mobile network operator (MNO) tower carve-outs becoming more prevalent. Prime examples are the Vodafone Vantage and Orange Totem carve-outs that began operations in March and November 2021, respectively.24,25

Valuation multiples for towers are also 22–25x EBITDA, up from 15–20x just two years ago.26 Many telecom companies are divesting their tower businesses to reduce debt and costs. As a result, we believe that independent tower companies, such as American Tower Corp and SBA Communications Corp (SBA), are positioned to benefit from the increased demand for wireless connectivity along with the continued accumulation of tower assets.

We believe many investors favour independent tower companies because of predictable revenue streams from leasing out space to wireless operators. Cell tower leases are long-term, and the fixed cost structure allows for revenue growth as the number of tenants increases while costs remain relatively flat. The multi-tenant structure helps diversify revenue streams and increase profitability.

During its Q4 2021 earnings call, American Tower said that it expects to build approximately 6,500 new sites, with about 4,000 in India, 1,900 in Africa, and 500 in each of Latin America and Europe.27 On its Q4 2021 call, SBA highlighted its entry into the Philippines, where management expects its main focus in the coming years to be on greenfield tower build opportunities.28 SBA also announced the completion of the AirTel Tanzania’s acquisition for US$176 million in early January 2022. The company has an estimated US$22 million contribution to EBITDA and Adjusted Funds From Operations (AFFO) for 2022. In addition, management said that it expects to complete about US$137 million in transactions by Q3 2022, and that it has either purchased or is under contract for 371 communications sites.29

The consolidation trend will likely continue as companies look for less saturated markets. For example, in April 2022, Equinix closed on its acquisition of the Nigerian data centre firm MainOne for US$320 million, or about 14x 2021 EBITDA. The deal closing came after Equinix announced the acquisition of four South American data centres from Entel for US$705 million in late March.30,31 With high barriers to entry and country-specific regulatory requirements, most expansion occurs by acquiring companies with an existing presence in these types of markets.

As social and environmental considerations climb higher on corporate and government agendas, data centres’ CO2 emissions are a consideration with demand for data increasing. However, energy consumed by data centres increases at a much slower pace than increases in data usage. For example, global data centre usage increased sixfold between 2010 and 2018, while the increase in energy consumed by data centres during that period was less than 10%.32 Data centres will play a major role in the transition to a more sustainable circular economy, which will rely on them to run data-intensive applications and store information. Many new data centres implement waste management, include liquid cooling technologies, and use renewable energy sources. For investors, sustainability features like these are increasingly important because of their potential to bring significant operational efficiencies and increase the value of the assets by extending the life of products and materials.33

To further their commitment to sustainability, some of Europe’s largest data centre operators signed the Climate Neutral Data Centre Pact, which aims to make data centres climate-neutral by 2030.34 Equinix, Digital Realty’s Interxion, AWS, CyrusOne, Google, Equinix, and NTT, are among the companies that signed the pact.35

Demand for data centers and cellular towers continues to grow, and future revenue appears attractive with next-generation technologies driving exponential growth in data. As an example, data centre absorption in the United States increased 44.3% in 2021.36 The current macroeconomic environment provides a boost to both income and price returns in major data centre markets, such as Northern Virginia, London, and Singapore. Also, the declining supply of available, high-quality real estate suited to data centres and cellular towers is among the longer-term structural tailwinds for existing data centre and cellular tower REITs.

EBITDA: Earnings before interest, tax, depreciation and amortisation (EBITDA) is a measure of a company’s operating performance. Essentially, it’s a way to evaluate a company’s performance without having to factor in financing decisions, accounting decisions or tax environments.

Consumer Price Index (CPI): CPI measures the average change in prices that consumers pay for a defined basket of goods and services.

Adjusted Funds From Operations (AFFO): Adjusted Funds From Operations is a measure used by REITs, which is equal to the trust’s funds from operations (FFO) with adjustments made for recurring capital expenditures and routine maintenance costs. FFO is calculated by adding depreciation, amortisation, and losses on sales of assets to earnings and then subtracting any gains on sales of assets and any interest income.